A Storied Career Concludes: David Carr to Retire after Twenty-Six Years at UMP 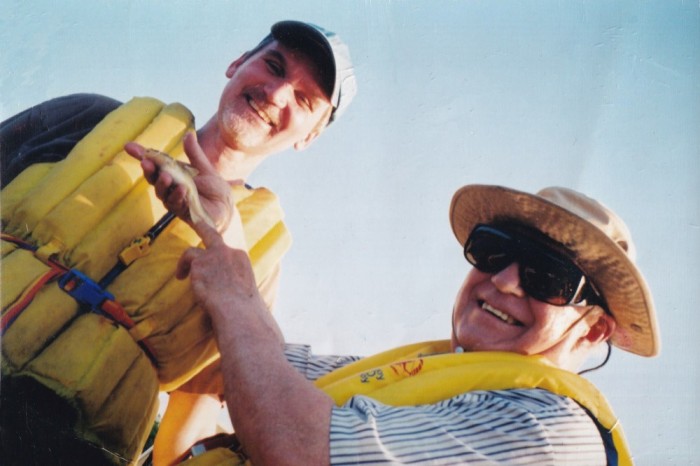 David Carr fishing with Ken Stewart, co-author of Freshwater Fishes of Manitoba, in 2004. As David describes the moment, “Ken insisted we all go fishing. That’s me with my ‘prize’ catch – probably the smallest catfish on record.” Photo credit: Sig Laser

After providing twenty-six years of exemplary guidance and leadership, UMP’s Director David  Carr  is retiring at the end of October.

When David joined the press in 1995, three staff were producing two to three titles each year. They shared office space with the university’s Senate secretariat on the main floor of the Engineering Building, with a “warehouse” located at the back of the lunchroom.

David began his publishing career at Turnstone Press and later served in the Cultural Industries Branch of the Manitoba government. At UMP, he adapted his knowledge and instincts from trade publishing to the scholarly realm. His approach to editorial, marketing, and distribution expanded the readership for the press’s titles and created a template for books of rigorous scholarship that appeal to wider audiences. His curiosity about ideas and his ability to connect with people brought countless authors who remain friends of the press.

Under David’s leadership, the press significantly expanded its publication program and now publishes twelve to fourteen new books in print and digital formats each year. Among the 206 titles produced since 1995 are books with lasting national impact, including John S. Milloy’s groundbreaking history of Canada’s residential school system, A National Crime.

David, you will be missed at UMP and in the St. John’s College community, but we wish you well for your next endeavours!