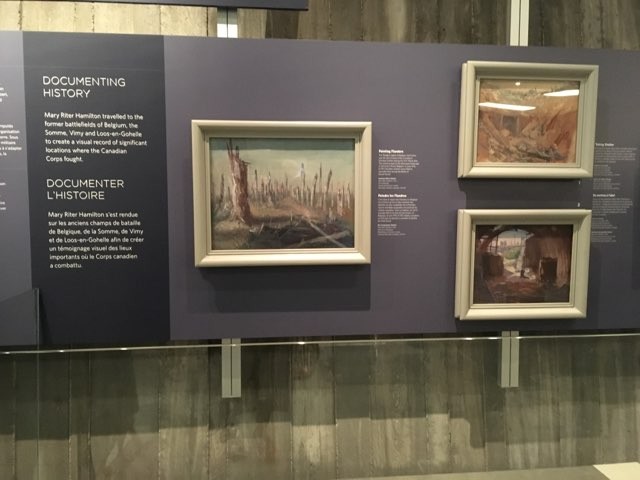 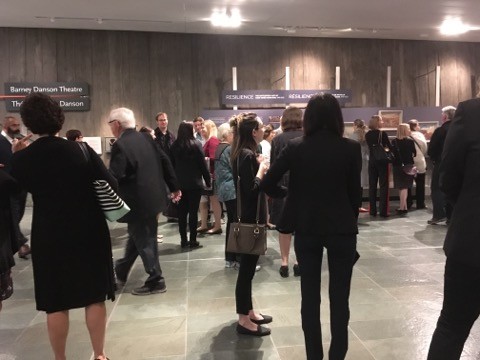 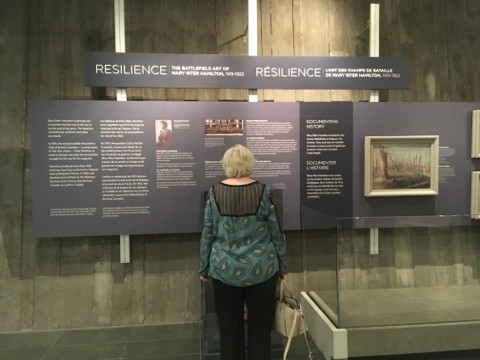 “Hamilton was over fifty years of age when she recorded the devastation of Vimy, Ypres, and the Somme Valley in over 300 paintings,” said Kathryn Young.

“Her life out in the field was grim as she lived in abandoned military huts, carried her easel and painting supplies on foot, and was often short of food. Very few artists shared her experience. When she returned to Winnipeg in 1926, in an extraordinary act of generosity, she donated the better part of her war collection to the National Archives as her gift to the Canadian people. Although her paintings are held in galleries across the country and can be found in private collections, her life ended in illness and poverty in 1954.”

Sponsored by The War Amps of Canada to commemorate their 100 years of service, the reception for this special exhibition attracted over 100 people, including the Belgian Ambassador and his wife.

There was a presentation and reception with speeches from the Museum, the War Amps, and Library and Archives Canada (LAC) where Hamilton’s paintings are conserved. With textual references are fifteen of Hamilton’s war paintings including: Trenches on the Somme (1919), First Boat to Arrive in Arras Following the Armistice (1920), and Clearing the Battlefields in Flanders (1921).

“I was pleased that the CWM curator, Melanie Morin-Pelletier, did an excellent job of integrating the history of the War Amps and their support for MRH into the exhibition’s text panels,” said Sarah McKinnon.

“2018 is the 100th anniversary of the War Amps as an organization—it was founded at the end of WWI in 1918 as a support group for veterans and their families (a role it still plays in Canada today).

“When Angela Davis and I approached the War Amps in the 80’s to tell them the story of MRH’s ‘commission’ to paint the battlefields, they were so interested and they have continued their support of the project until the present time. Exhibition support isn’t the War Amps’ regular line of work, but the late Cliff Chadderton, the former CEO (and veteran/amputee of the Winnipeg Rifles in WWII), seized upon the MRH story enthusiastically and told it widely in the War Amps organization and to government connections in Ottawa.”

Though Young and McKinnon have spent many years researching Mary Riter Hamilton’s life and work, they enjoyed the opportunity to see more of her work.

“The fifteen paintings in the exhibition looked better than I had remembered them from the earlier traveling exhibitions at the various venues,” noted Sarah McKinnon. “The reason is that LAC had made a special effort to ‘reconserve’ some of them—bringing out the colour and the detail as I hadn’t seen before. I first viewed the works at the Archives (unframed) in the mid 80’s—before any conservation at all, and then again in the 90’s when the show opened at the University of Winnipeg and then was touring. But the ones chosen for this exhibition were more striking in the present.”

Saskatoon launch of Toward a New Ethnohistory! »