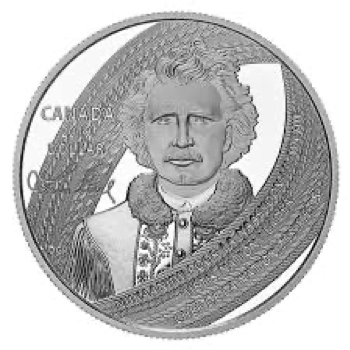 Our idea for a Rooster Town commemoration was a silver half dollar minted in Winnipeg with the image of the ∞ symbol inscribed with the names of some of the founding families of Rooster Town.

Some of the names included would be Hogue (Hogg), Morrissette, Berard, Parisien, and others.

On the other side of the coin we imagined the confluence of the Red and Assiniboine Rivers with markers indicating the households of Rooster Town.

It would not have a map of Winnipeg, as we wish the focus to be on the community and not the city.

Alongside the coin, there would be a little piece of cardstock acknowledging the residents of Rooster Town and how they formed their own community in response to their multiple dispossessions due to colonialism, and of the injustices committed to the metis people, but specifically the people of Rooster Town.

Proceeds of the commemorative coin would go towards different metis organizations like the Manitoba Metis Federation.

The coin would also be unveiled at the McNally Robinson at Grant Park Mall as it is geographically close to where Rooster Town was.

A. https://en.wikipedia.org/wiki/M%C3%A9tis_flag#/media/File:Metis_Blue.svg
B. (Map similar to this without the parishes). Page 9 from Peters et al. Rooster Town
C. (Commemorative coin example) https://www.mint.ca/store/coins/2019-special-edition-proof-dollar—-louis-riel-father-of-manitoba-prod3580029

« Excerpt from Civilian Internment in Canada