We are pleased to announce that there is a companion website for Darryl Leroux’s upcoming book Distorted Descent: White Claims to Indigenous Identity. 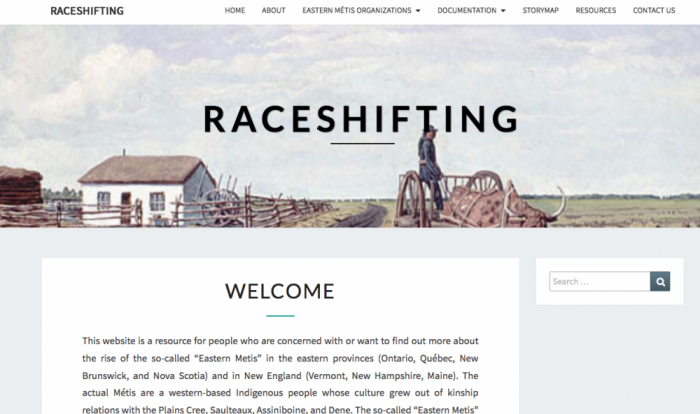 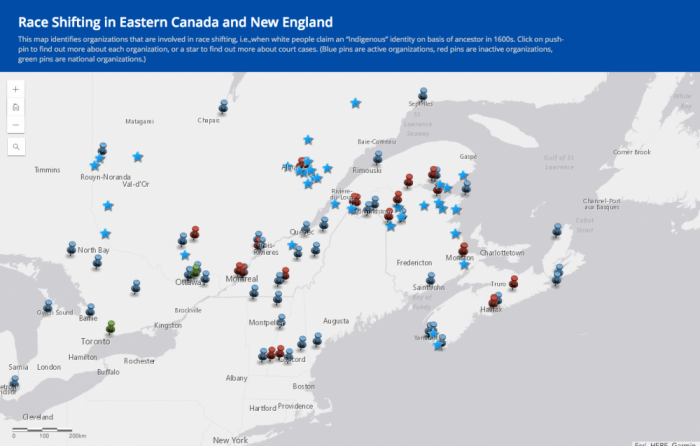 This website is a resource for people who are concerned with or want to find out more about the rise of the so-called “Eastern Metis” in the eastern provinces (Ontario, Québec, New Brunswick, and Nova Scotia) and in New England (Vermont, New Hampshire, Maine). The actual Métis are a western-based Indigenous people whose culture grew out of kinship relations with the Plains Cree, Saulteaux, Assiniboine, and Dene. The so-called “Eastern Metis” are instead an example of what is referred to as race-shifting or self-indigenization, a process that, in the case of this research project, involves white French-descendants inventing and claiming an “Indigenous” identity, often in opposition to actual Indigenous peoples.

The website also includes all of the publicly-available court documents (expert reports, testimony, interviews, membership records) that have been submitted in several of the key “Eastern Métis” court cases in Québec.

Much of the material on the website is analyzed in Darryl Leroux’s book Distorted Descent: White Claims to Indigenous Identity, which will be available in September 2019.

About the Book
Distorted Descent examines a social phenomenon that has taken off in the twenty-first century: otherwise white, French descendant settlers in Canada shifting into a self-defined “Indigenous” identity. This study is not about individuals who have been dispossessed by colonial policies, or the multi-generational efforts to reconnect that occur in response. Rather, it is about white, French-descendant people discovering an Indigenous ancestor born 300 to 375 years ago through genealogy and using that ancestor as the sole basis for an eventual shift into an “Indigenous” identity today.

After setting out the most common genealogical practices that facilitate race shifting, Leroux examines two of the most prominent self-identified “Indigenous” organizations currently operating in Quebec. Both organizations have their origins in committed opposition to Indigenous land and territorial negotiations, and both encourage the use of suspect genealogical practices. Distorted Descent brings to light to how these claims to an “Indigenous” identity are then used politically to oppose actual, living Indigenous peoples, exposing along the way the shifting politics of whiteness, white settler colonialism, and white supremacy.

About Darryl Leroux
Darryl Leroux is associate professor in the Department of Social Justice and Community Studies at Saint Mary’s University in Kjipuktuk (Halifax, Nova Scotia). He has been working on the dynamics of racism and colonialism among fellow French descendants for nearly two decades.