An excerpt from Don Proch: Masking and Mapping.

University of Manitoba, day one: Ivan Eyre started his Basic Drawing class by stating that an understanding of drawing was the basis for exploring other paths in the visual arts. My interest in exploring drawing began in these classes and continues on.

After receiving a Bachelor of Fine Arts and a Bachelor of Education, I worked as a high-school art teacher, during which time I continued drawing. 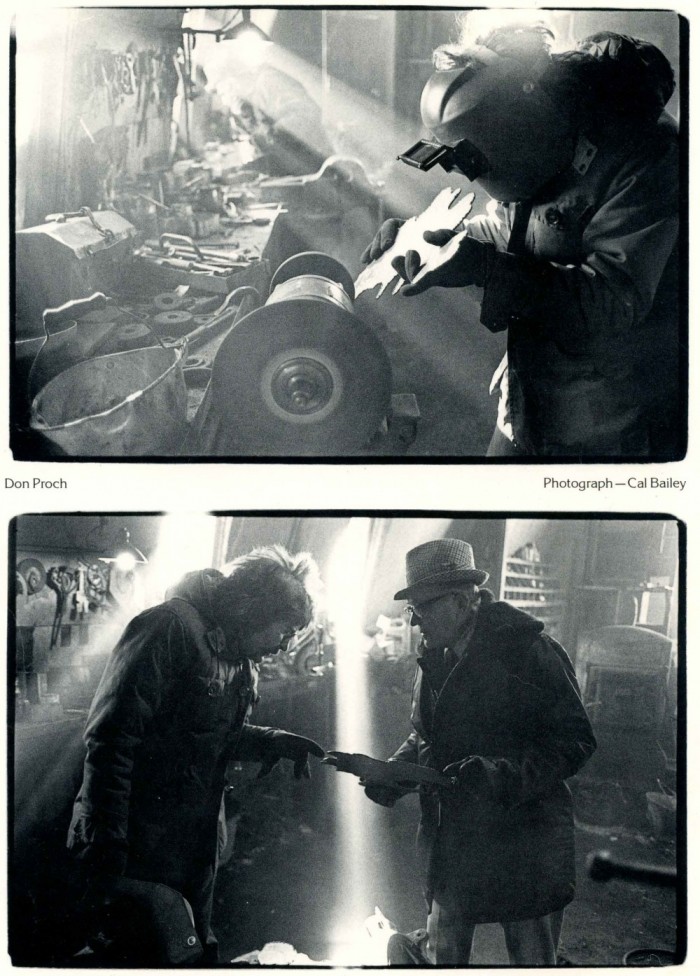 After several years, a few shaped drawings led me to “Asessippi Tread”, an early three-dimensional drawing. In making that piece, I called on the expertise of others (a welder, chrome plater, and fabricator) to help make the 3-D drawing.

At that point, The Ophthalmia Co. of Inglis, Asessippi, Manitoba, was created. Working toward the Asessippi exhibition at the Winnipeg Art Gallery, the Ophthalmia Co. membership grew as more interested people became involved.

In attempting to sum up my artistic approach and vision, I look to a moment even earlier, to what I believe was a time in my life that planted the seed for my making art: I was eight years old when George, son of Irene and George Anderson, moved to Inglis, Manitoba, from many northern Hudson’s Bay Company store postings (Baker Lake, Pangnirtung, etc.).

The Andersons brought with them a collection of exquisite Inuit art from the 1930s and 1940s.

George and I were classmates and great friends. We often played with these magical objects that were prominent throughout their residence.

There were bears, kayaks, seals, walrus, whales, drums, tools, hunting spears, fish, narwhals, sealskin-clad figures, hunters, and igloos, made from soapstone, bone, sinew, sealskin, wood, and ivory, with a variety of textures and natural colours all done in wondrous detail.

This world-class art left a lasting impression on a young mind. The wonder for me was in who made this work, how, and why?

My art is an attempt to portray that wonder in the land that I know.