What’s life like in a prairie town? Not today, but in the first half of the twentieth century?

There were once hundreds of these places with names and histories. They ranged in size from a railway crossing with a hotel and an elevator to “elevator rows” surrounded by several thousand residents. For students three generations removed, it’s an experience lost to the ages.

For readers thinking of inquiring into that experience, the printed record is remarkable, particularly in imaginative literature. One might begin with a novel such as Mitchell’s Who Has Seen the Wind? For a bleaker view, Ross’s As For Me and My House. From an earlier generation, something by Stead or Grove or McClung. Or, from a later generation, Kroetsch’s Words of My Roaring and Vanderhaeghe’s stories. There are Chinese and Japanese and Ukrainian and Mennonite and Icelandic and Indigenous and Anglican—and many more—perspectives. 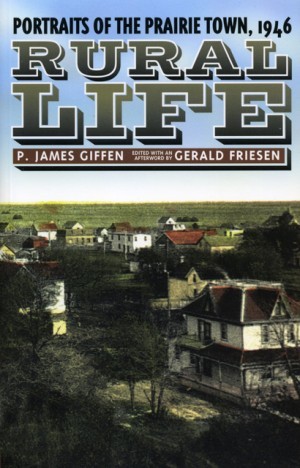 Students in the social sciences could try economist Vernon Fowke (The National Policy and the Wheat Economy) or sociologist Jean Burnet (Next-Year Country) or geographer John Tyman or political scientist C. B. MacPherson. And then there are the histories, amateur and professional.

In the late 1940s, after a long Depression and six years of war, the prairie provinces were still surprisingly rural: two-thirds of residents lived on farms and in small towns. But their world was on the edge of great change. How would potential leaders get the knowledge and skills to guide the adjustment? Hired by a royal commission inquiring into adult education in Manitoba, Jim Giffen, sociologist, looked at leadership in Carman, Elgin and Rossburn as background for the commissioners. Judged “too revealing” to be published at the time, his report was published sixty years later. I wrote a long postscript to put it in context. Rural Life: Portraits of the Prairie Town 1946 (2004) is a study of adult education, social relations, ethnic differences, citizen activism. Not so much what a town looked like but how its residents might be mobilized to meet the coming challenges.

But what if you wanted to know how it worked? Dinsmore, Saskatchewan, population nearly 500, had twenty-some businesses, a school, a livery barn, doctor’s office and one-nurse hospital, home-grown electricity generating system, a hotel that sold blocks of ice cut from the river, paper money known as shinplasters. No telephone calls after 7:00 in the evening, or on Sunday, or when the operator was “answering a call of nature.” 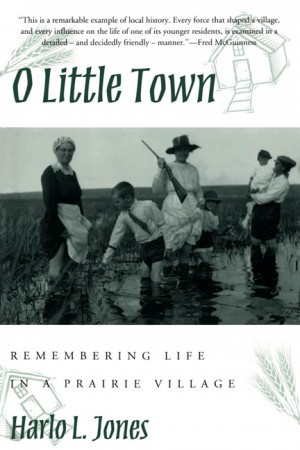 As for the social life of children: can a frog regurgitated by a garter snake, thanks to a child’s intervention, hop away from the near-disaster? Is there sport to be had in running atop boxcars? What are steelies and hectographs? Rubber ice? When puberty arrived in those far-off days, did sex follow soon after?

Lt. Colonel Harlo Lloyd Jones, DFC, CD, who died at 81 in 2005, knew this and much more. After he left Dinsmore, he flew 32 sorties over Europe during the Second World War, graduated from UBC under the veterans’ charter, wrote for several newspapers, rejoined the RCAF, and ended his working career at St. Boniface Hospital. And then found a new life as author of two memoirs.

Mr. Jones asked me to read the manuscript and I encouraged the U of M Press to publish it. Having just re-read it, I’m glad I did.

O Little Town has many strengths. Distinguished by its style and reliability and especially its affection for a prairie place in childhood, it offers sixty to ninety-year-olds a nostalgic voyage into the past, an exercise in memory-restoration not to be dismissed. And readers of lesser vintage will discover a startlingly-clear picture of the world that shaped our own.

Gerry Friesen joined the history department at the University of Manitoba in 1970. In 2004 he edited Jim Giffen’s study of leadership in three Manitoba towns, Carman, Elgin, and Rossburn, which was written for the province’s royal commission on adult education (1946). For the past three years, Friesen has been reading about one of St. John’s Collegiate School’s most famous graduates, John Norquay, premier of Manitoba 1878-1887. He says a biography is coming. Soon.