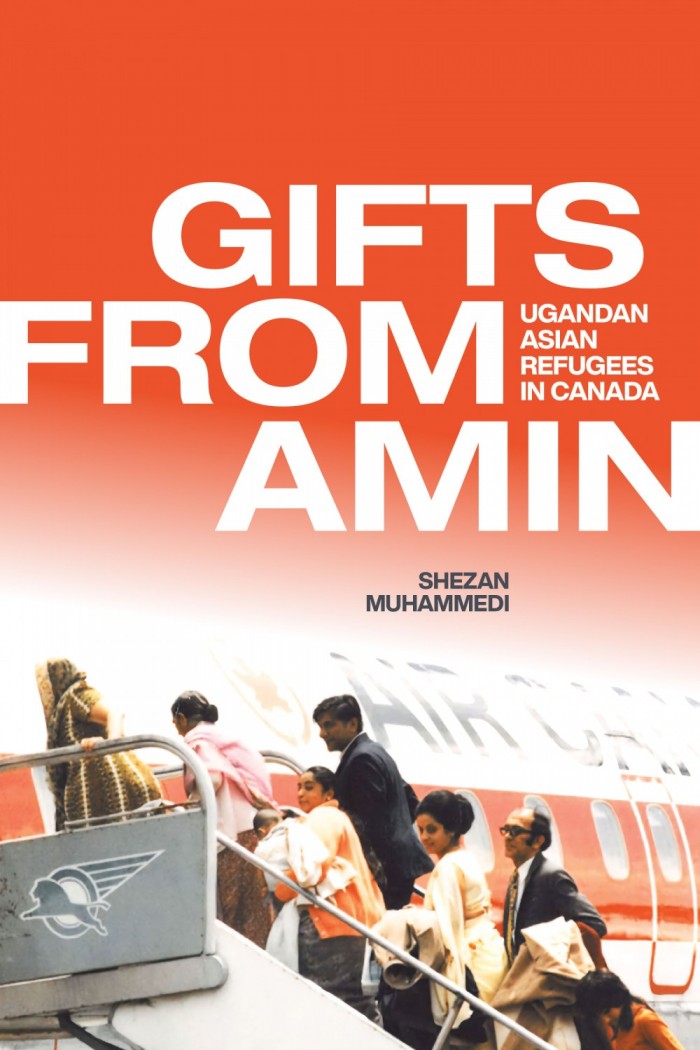 On a brisk evening in late October 1972, my mother, grandmother, and two uncles arrived in Ottawa as refugees from Uganda. They were part of a larger movement of 7,550 Ugandan Asian refugees who were resettled across Canada from 1972 to 1974. At the young age of nineteen, my mother became the principal applicant for the family’s refugee status in Canada. As the only readily employable individual within the family, she was entrusted by the Canadian government to financially support her two younger brothers and her own mother. Decades later, with a cheerful smile, she recalled her first experiences of a true Canadian winter and her earliest interactions with Canadians. She explained her commute to the Canadian Imperial Bank of Commerce (CIBC) for work after only three days in Canada:

When we woke up and it snowed that day, like everything was covered white. So everything looked different. . . . When I took a bus and went to the bank the day before, things looked differently. Because of the snow, everything looked different to me, and I didn’t have winter boots, a winter coat. …I got on the bus and I tried to follow [the route], and I got lost. So I was supposed to be at work at 8:30 or 9 a.m. and I didn’t get there until 12 or 12:30 p.m. . . . [At the bank] I only knew one person, who [had] interviewed me. So when I got there, I saw her sitting in her office, so I just went to her and I was already blue and purple, like I was frozen. My hands were frozen, my toes were frozen. . . . She asked me, “What happened? Did you get lost?” And I just started to cry and then she realized that I’m frozen, so she took me downstairs. . . . She made me a cup of tea, she put a blanket on me and gave me a piece of toast. And I was just sobbing away because I was so frozen and I didn’t make it to work on the first day and I missed [making it to work on time], you know? And I was lost, and I didn’t know how to get back to the hotel, I couldn’t find this place, I didn’t know who to call, so I was lost. I cried and cried and cried. . . . And then she says, “Why aren’t you wearing your shoes? Why aren’t you wearing your coat? Where is your scarf?” And I told her that I didn’t have any. . . . Around four thirty or five o’clock I was supposed to finish work. She came to me and said, “We would like to see you downstairs before you go home.” So when I went downstairs, the staff—during the day or lunch or whatever—they all went and bought me something warm. There was a scarf that somebody gave me. Somebody gave me gloves. They gave me a kettle to make tea for myself. They bought a few little things. They gave me a map. And so I was touched, I was touched that day.

Her first days in Canada demonstrated one of the numerous ways that Ugandan Asian refugees experienced the Canadian spirit and climate. Ugandan Asian refugees were admitted to Canada under the Liberal government of Pierre Elliott Trudeau after being expelled from their homes by the president and military general of Uganda, Idi Amin. President Amin declared on 4 August 1972 that Uganda had no room for “the over 80,000 Asians holding British passports who are sabotaging Uganda’s economy and encouraging corruption” and that he wanted to see power over Uganda’s economy restored to the “hands of Uganda citizens, especially ‘black Ugandans.’” The expulsion decree forced the exodus of nearly every Ugandan of South Asian descent within only ninety days.

This was part of a larger campaign administered by Amin’s regime involving mass violence perpetrated against hundreds of thousands of Ugandans. Three terror units responsible for mass violence were created under President Amin’s rule: the State Research Bureau, the Public Safety Unit, and the military police. In addition, kondoism was widespread. Kondos refers to bandits who arbitrarily confiscated goods or killed Ugandans either as members of the military or the general public who rented uniforms from military personnel. Under Amin’s rule, from 1971 to 1979, hundreds of thousands of Ugandans died from the decentralized violence that took place due to kondoism and the terror units. Members of state security forces and soldiers were free to loot, smuggle, and blackmail Ugandans with little fear of being reprimanded by the state or being disciplined by their superiors. This encouraged supporters of Amin’s regime to kill for not only economic gains but also for any other reason they deemed fit. There are numerous and less publicized accounts of individual soldiers conducting executions and loaning army uniforms to the public to extort money from Ugandans. The guise of kondoism shielded the violence of government soldiers and effectively legalized the killing squads of Amin as soldiers and the public could act with impunity. Acts of mass violence were carried out against Ugandans regardless of their ethnicity, religion, political affiliations, or economic situation. Estimates for those murdered under Amin’s regime span from two hundred thousand to five hundred thousand Ugandans.

When Amin announced the expulsion decree, Britain immediately called for aid from the Commonwealth community, including Canada, as it could not absorb large numbers of refugees due to heightened levels of racial antagonism in 1970s England. Many Ugandan Asians were previous or current British passport holders, and Amin vehemently argued they were “Britain’s problem.” A second request for help came directly to Canada’s prime minister from Prince Shah Karim al-Hu-sayni, Aga Khan IV, the spiritual leader of the Shia Nizari Ismaili Muslim community. Many Ismailis in Uganda were directly affected by the order, and the Aga Khan asked Trudeau, his close personal friend, to provide a safe haven for his community. The two requests for aid were echoed by the United Nations high commissioner for refugees, Prince Sadruddin (the uncle of Aga Khan IV), who pleaded with the international community to resettle those who were transported to refugee camps following the expulsion deadline of 8 November 1972.

Canada answered the call for aid amid numerous concerns at home. The Cold War contest between capitalism and communism, a reformulation of Canadian identity after the Royal Commission on Bilingualism and Biculturalism, high rates of unemployment, shifting attitudes towards human rights activism, and the official deracialization of Canadian immigration policy formed the backdrop for the arrival of nearly eight thousand Ugandan Asian refugees by the end of 1974. The United Kingdom claimed responsibility for almost thirty thousand Ugandan Asians who held British passports. However, it would not admit Ugandan Asians who had opted out of British citizenship during Ugandan independence in 1962 in exchange for becoming Ugandan nationals. Therefore, the Canadian government prioritized resettling those who became stateless when their Ugandan citizenship was revoked under Idi Amin’s regime. Canada became the single largest recipient of stateless Ugandan Asians, marking one of the largest resettlements of non-European and non-white refugees in the nation’s history up to 1974. Additionally, the arrival of Ugandan Asians marked the first major resettlement of a predominantly Muslim group of refugees in Canada.

This book explores how Ugandan Asian refugees transitioned into Canadian citizens and their personal constructions of identity and sense of belonging. Understanding the historical context of their expulsion from Uganda, the multiple influences behind the Canadian government’s decision to help them, and their lives in Canada after fifty years of resettlement provides insight on the relationships between public policy, refugee resettlement, and integration in the twentieth century.

Similar to other refugee communities who arrived in Canada during the postwar period, Ugandan Asian refugees were not passive recipients of international aid. They navigated various bureaucratic processes to secure safe passage to Canada, applied for family reunification, and made concerted efforts to integrate—and often give back—to Canadian society. By co-opting reception centres as a space for building social bonds and supporting integration, seeking immediate employment to raise capital to support the sponsorship of family members, submitting letters to the Canadian government to request reunification with family members overseas, and demonstrating the importance of having family members in Canada during the resettlement process, Ugandan Asian refugees reshaped government policies on refugee resettlement. The abundant use of oral histories throughout the book highlights the agency of migrants as they interacted with evolving geopolitical landscapes. While Canada and other nation-states hold sovereignty over who is, and more importantly who is not, admitted into their borders, migrants participate in complex relationships between themselves and the international community.

This book informs policymakers, academics, and the public in regards to future refugee resettlement programs in Canada. Displaced people represent one of the most disenfranchised and marginalized groups in the current geopolitical climate. Given the ongoing political conflicts, rising levels of inequality, climate change, and other disasters, revisiting past resettlements in our nation’s history is critical to informing current policies, reception efforts, and public consciousness related to those fleeing persecution. One limitation of the book is the resettlement bias, as it does not review displaced people who are not provided with international resettlement opportunities. Unfortunately, only 1 percent of recognized refugees by the United Nations High Commissioner for Refugees (UNHCR) are resettled abroad. By capturing the voices of refugees, I aim to challenge the rhetoric used by politicians who keep displaced peoples “over there.” Refugee scholars agree that Western governments purposefully reframe asylum seekers approaching their borders as “economic migrants,” “illegal or undocumented,” “queue jumpers,” and “bogus refugees.” Reducing the experiences of refugees to matters of state policy, border control, and public opinion fundamentally severs the shared human connections between refugees and citizens. Consequently, this study used life histories abundantly as a means of capturing the hopes, dreams, and aspirations of Ugandan Asian refugees alongside their fears, struggles, and traumas of displacement. Focusing on the human aspects of their life histories invigorates our understanding of the refugee experience while reminding us of our shared human bonds.

The current global political landscape has tarnished the humanitarian impulse behind providing refuge for displaced peoples. Politicians have leveraged this vulnerable population in a ploy to garner votes for their respective parties. As refugee scholar Emma Haddad outlines, politicians participate in “organized hypocrisy” where “states create refugees, then fail to take responsibility for them.” My book is but one small step towards a deeper understanding of refugee resettlement, and it situates Ugandan Asian refugees within the Canadian historical record as Canadian citizens. Fifty years after the expulsion decree, the global community can begin to understand why former governor general of Canada Adrienne Clarkson describes Ugandan Asian refugees in Canada as “a present from Idi Amin.” I hope this book helps readers begin to explore how, as Ugandan Asian refugee Aziz put it, “even the Canadian government, even the people, they really helped us to be what we are.”

Recipes and Reciprocity: Excerpt on nutritional colonialism and Indigenous Knowledge »