Emily Eaton contributed this piece on her Growing Resistance to the Regina Leader-Post on July 24, 2013:

“Farmers, especially from the so-called First World, are not typical actors in the movement against GM crops, yet in 2001 a coalition of nine organizations led by prairie farmers stood up against Monsanto’s plans to introduce Roundup Ready wheat in Canada. 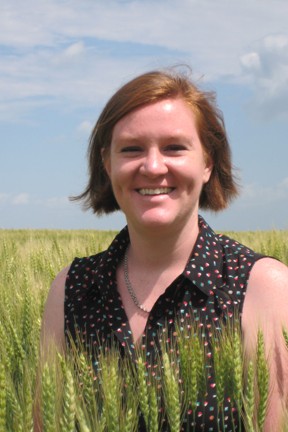 In Growing Resistance, I analyze the diverse coalition of forces that successfully pressured Monsanto to withdraw its Roundup Ready (RR) wheat variety from the Canadian regulatory system in 2004.

I spent the better part of a year in 2006-07 travelling throughout the prairies to gather the information for this book. My fieldwork involved interviewing farmers and members of organizations that both supported and rejected RR wheat. Interviewing farmers was by far the most interesting for me. Although I grew up in Saskatchewan, farmers perceived me as an outsider. I used this outsider status to my advantage procuring detailed descriptions of the diversity of actors, positions and strategies pursued by the different coalition members. Indeed, the coalition’s main strength was its diversity. Mainstream prairie farmers found themselves working alongside their more radical organic counterparts and organizations like Greenpeace, famous for its civil disobedience. The farmers I interviewed talked about their uneasy alliance with groups like Greenpeace, whom many saw as urban radicals out of touch with rural prairie realities. Once the coalition had begun its work there was simply no constituency that Monsanto could point to as supportive of their attempts to introduce RR wheat into Canadian markets and farmers’ fields.

I believe the story of this diverse coalition of farmers, environmentalists, and urbanites serves as an important example for other social justice campaigns.

It has taught me that corporate power can be successfully challenged by coalitions of interest groups that incorporate very local and specific concerns into a wider discourse of opposition that draws on environmental and consumer activism. It seems to me that coalitions that cross urban/rural boundaries, and local and global concerns are our best hope for securing social change in the years to come.”

Emily Eaton is an associate professor of geography at the University of Regina specializing in political economy and natural resource economies. She is also active in a variety of social justice struggles. Eaton’s first book was Growing Resistance: Canadian Farmers and the Politics of Genetically Modified Wheat. View books by Emily Eaton.

Stet.: Notes from the Managing Editor »