“Is it OK if I just write Tshaukuesh?”

“Is it OK if I just write ‘Tshaukuesh’? ‘Elizabeth Penashue’ is so long and so many people want me to sign their books!” 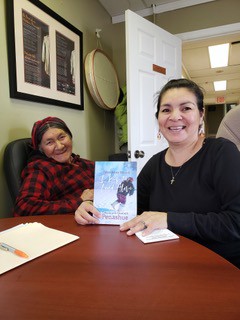 Tshaukuesh and her daughter Kanani before the launch. 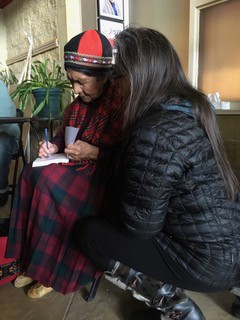 I said I thought it was just fine.

The author of Nitinikiau Innusi: I Keep The Land Alive is now a single name star along with Cher and Adele.

The launch was a highlight of the bi-annual Labrador Research Forum.

Speaking to a CBC reporter, Tshaukuesh said, “I’m very happy. I’m proud. A lot people were asking me, ‘Elizabeth, when are you going to finish your book?’ and I said, ‘Almost, almost!‘”

Begun as a diary in Innu-aimun in 1987, the English version of the book is finally published, after ten years of work editing and translating. The book documents Tshaukuesh’s experiences as a leader in the Innu protests against NATO occupation of Innu land in the 1980s and ’90s and eloquently describes daily life in nutshimit (on the land).

Destined to become a classic of Innu history, it also includes numerous beautiful photos. More copies are on their way to Labrador and the book is also available from University of Manitoba Press.

About the Book
Labrador Innu cultural and environmental activist Tshaukuesh Elizabeth Penashue is well-known both within and far beyond the Innu Nation. The recipient of a National Aboriginal Achievement Award and an honorary doctorate from Memorial University, she has been a subject of documentary films, books, and numerous articles. She led the Innu campaign against NATO’s low-level flying and bomb testing on Innu land during the 1980s and ’90s, and was a key respondent in a landmark legal case in which the judge held that the Innu had the “colour of right” to occupy the Canadian Forces base in Goose Bay, Labrador. Over the past twenty years she has led walks and canoe trips in nutshimit, “on the land,” to teach people about Innu culture and knowledge.

Nitinikiau Innusi: I Keep the Land Alive began as a diary written in Innu-aimun, in which Tshaukuesh recorded day-to-day experiences, court appearances, and interviews with reporters. Tshaukuesh has always had a strong sense of the importance of documenting what was happening to the Innu and their land. She also found keeping a diary therapeutic, and her writing evolved from brief notes into a detailed account of her own life and reflections on Innu land, culture, politics, and history.

Beautifully illustrated, this work contains numerous images by professional photographers and journalists as well as archival photographs and others from Tshaukuesh’s own collection.

About the Author
Tshaukuesh Elizabeth Penashue is well known as a cultural and environmental activist. Her work has been recognized by a National Aboriginal Achievement award, an honorary doctorate from Memorial University, and numerous media interviews and profiles, articles and consultations.