Last week I had the thrill of launching Horse and Buggy Genius: Listening to Mennonites Contest the Modern World to about 100 interested folks at McNally Robinson Booksellers. I had the opportunity of telling the folks how this book has been gestating for 8 years. I told them how it had all begun with the idea of comparing Old Order Mennonites in Canada with Old Colony Mennonites in Latin America, a SSHRC grant, the assembling of a team of seven researchers. 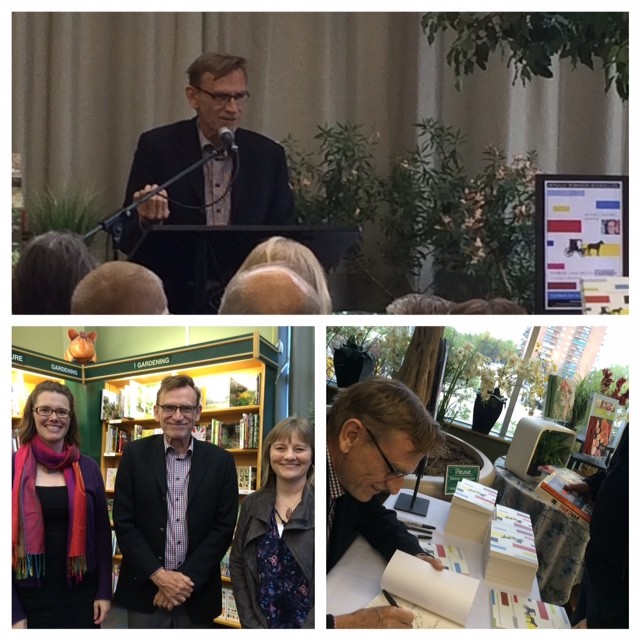 From the May 12 launch at McNally Robinson.

First, Tina Fehr Kehler and Karen Warkentin, two of the seven research assistants, were present to tell of their time in Campeche State, Mexico, and Santa Cruz province in Bolivia, respectively. They both spoke of arriving ‘cold,’ finding themselves asking not only for folks who might be willing to be interviewed about the history of their family and community, but at once asking also for room and board. Tina spoke of finding herself on day one in a room of ministers and bishops gathering for a semi-annual meeting. Karen recalled a child dressing in a long dress typical of Old Colony girls and women pointing out that her modern clothes resembled ‘under’ clothes.

The second aspect of the book launch that I enjoyed immensely were the questions asked by the audience. As always, here is a rare indication of what an audience hears and is interested in. The questions, as I recall them, ranged from a more typical, “But are horse and buggy communities sustainable?” (more sustainable it would seem than 80% of the world’s rural folks who have been driven into megalopolises by global forces), to “How do these folks perceive the outside world?” (mostly as too fast, somewhat chaotic and judging from abysmal family histories of depression, divorce and elder isolation, socially destructive) to “How to you deal with the ethics of interviewing folks who may never read the materials you write about them?” (a difficult question, uncomfortably answered with an explanation that the book is about them speaking to us not us to them).

The launch though is also a time to reflect on the very early stirrings that such a book should be written. I recall how on a trip to Chihuahua, Mexico, in 2004 I found myself determined to visit the one remaining ‘horse and buggy’ community still in existence in northern Mexico. I recall arriving at Sabinal colony with Ann and Jake Enns who were working with Mennonite Central Committee in Nuevo Cases Grandes. It seemed remarkably eerie, the vegetation-less compilation of cement houses on a semi-arid plain. In the book I write about this visit, how vibrant life appeared after we began making our visits: young Johann spoke of his engagement and his eager anticipation of marriage; little Maria ran out to meet her papa and confidently took the just unhitched horse to the water; Mrs. Hiebert insisting that we stop by for Sunday afternoon Faspa and witness dozens of grandchildren play in the farmyard and inside a room of young sons and sons-in-law scheming on relocating to the well-watered south and, in church, the minister praising the youth for having assembled at the deathbed of the beloved great-grandmother Mrs Friesen. These ties of kinship brought life to a tree-less plain.

The same year I also travelled to Bolivia and here I met the much more vibrant Old Colony community transplanted from Mexico over the last 4 decades. I marvelled at a community that today numbers about 75,000 Canadian descended horse-and-buggy Mennonites, the lost children of Menno nation. I marvelled at the ability of these folks with minimal education but a stubborn religious faith insisting on simple living, honouring their parents by keeping things ‘as they were,’ seeing the procurement of land for the next generation as sacred duty, and keeping alive the ancient knowledge of living off of the land with little technology. I wondered: how these folks were able to thrive? How were they able to resist the very things my modern world in the north considers absolutely non-negotiable – the ascendancy of the individual, upward mobility, self actualization, individual rights and freedoms, access to consumer goods, the latest fashions. None of these things matter to a people who insist on living within community, keeping education rudimentary, living a life close to nature, mostly outdoors. The folks I met on this 2004 trip welcomed me back.

I went home and three years later applied for SSHRC funding to pay for research salaries of seven graduate and post-graduate students, from the Universities of Manitoba, Winnipeg and Toronto in Canada, the Uppsala in Sweden, VRU in Amsterdam and Free University in Berlin. Andrew, Anna Sofia, Anne, Jakob, Karen, Kerry and Tina would meet me for a workshop on oral history and ‘horse and buggy’ culture in the old schoolhouse in St. Jacobs, Ontario in September 2008. Over the next three years the researchers visited communities, one each in Ontario, Belize, northern Mexico, southern Mexico, Bolivia and Paraguay. In October 2011 we reassembled to form the core of the ‘Mennonites and Anti-modernity’ conference at the University of Winnipeg. Most of the researchers published full length research papers in a special issue of the Journal of Mennonite Studies. And, as agreed I took the one thousand pages of research materials they had generated, and armed with my own research notes along the way, moved to Santa Cruz, Bolivia during the early months of 2012 to write the first draft of the book. Four years later it is in your hands. Enjoy!

Royden Loewen is a professor of history and Chair of Mennonite Studies at the University of Winnipeg. His books include Family, Church and Market: A Mennonite Community in the Old and New Worlds, and From the Inside Out: The Rural World of Mennonite Diarists. View books by Royden Loewen.

« Chantal Fiola the big winner at the 2016 MBAS