We have some exciting audiobook production in the works—meet the narrator!

Our award-winning 2016 memoir, A Two-Spirit Journey: The Autobiography of a Lesbian Ojibwa-Cree Elder, by Ma-Nee Chacaby with Mary Louisa Plummer, is being recorded as an audiobook narrated by Marsha Knight!

Marsha Knight (Playwright, Bake-Off/Performer, The View From Here) has worked extensively in the theatre and film industry in both up-front and behind-the-scenes capacities. Her most recent play Mary is about Mary Two-Axe Earley, a Mohawk woman and activist who advocated for Indigenous women’s rights—specifically for them to maintain their Indigenous status after marrying a non-status person. She currently has numerous initiatives, all of which include advocating for accurate historical and current representation of Indigenous Peoples in the varied digital and live medium. Marsha is currently instructing Introduction to Theatre: Indigenous Perspectives at the University of Winnipeg where she is also studying Anthropology. She appeared with Sarasvàti for Hope McIntyre’s production of Eden and assisted with facilitating workshops for Jail Baby. She has been in this business for over 20 years starting with Ian Ross’ Governor General’s award winning drama fareWel (PTE). She performed in fareWel two additional times, one being at the Edinburgh Fringe Festival. She was also in three separate productions of Rez Sisters (PTE, Theatre Northwest, Magnus Theatre). Her recent work includes Norm Foster’s Kiss the Moon, Kiss the Sun (Theatre Northwest), Shakespeare in the Ruins Antony & Cleopatra, and Drew Hayden Taylor’s Crees in the Caribbean (Magnus Theatre).

About A Two-Spirit Journey 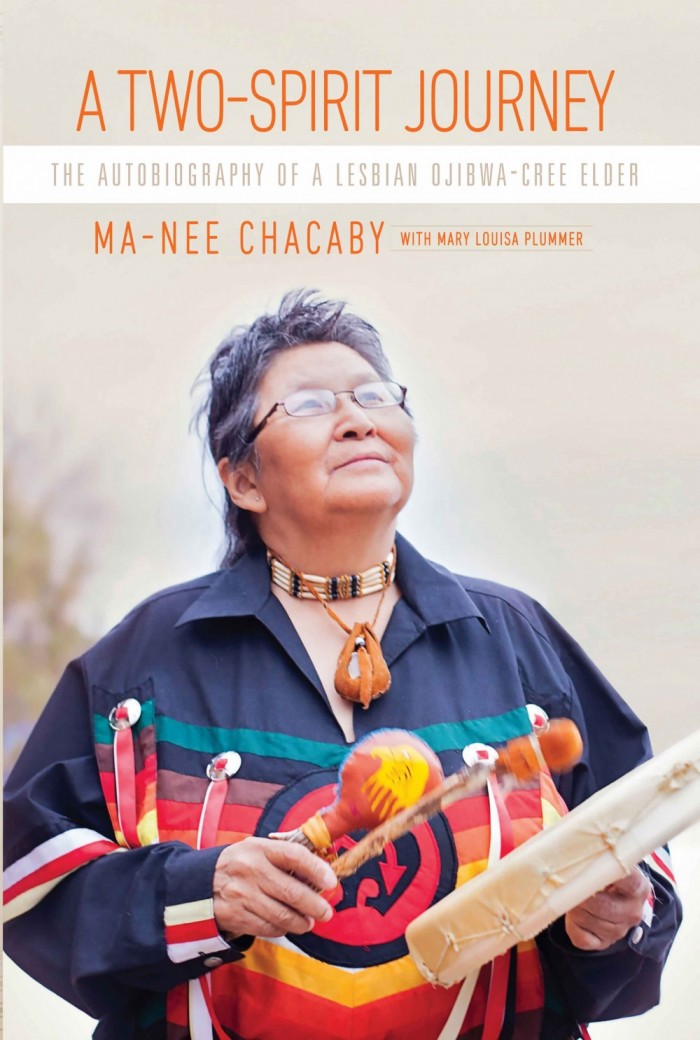 A Two-Spirit Journey is Ma-Nee Chacaby’s extraordinary account of her life as an Ojibwa-Cree lesbian. From her early, often harrowing memories of life and abuse in a remote Ojibwa community riven by poverty and alcoholism, Chacaby’s story is one of enduring and ultimately overcoming the social, economic, and health legacies of colonialism.

As a child, Chacaby learned spiritual and cultural traditions from her Cree grandmother and trapping, hunting, and bush survival skills from her Ojibwa stepfather. She also suffered physical and sexual abuse by different adults, and in her teen years became alcoholic herself. At twenty, Chacaby moved to Thunder Bay with her children to escape an abusive marriage. Abuse, compounded by racism, continued, but Chacaby found supports to help herself and others. Over the following decades, she achieved sobriety; trained and worked as an alcoholism counsellor; raised her children and fostered many others; learned to live with visual impairment; and came out as a lesbian. In 2013, Chacaby led the first gay pride parade in Thunder Bay.

Ma-Nee Chacaby has emerged from hardship grounded in faith, compassion, humour, and resilience. Her memoir provides unprecedented insights into the challenges still faced by many Indigenous people.