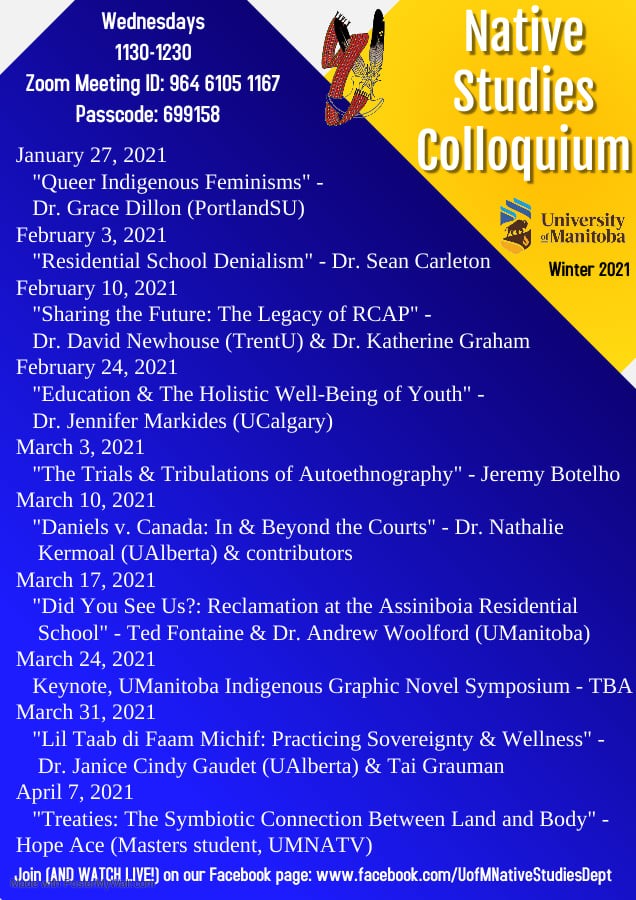 Three of our Spring 2021 books are being featured at this year’s Winter Colloquium with the Department of Native Studies at the University of Manitoba!

Come join the weekly UMNATV colloquium panel discussing and visiting with some of the best speakers, leaders, and researchers in Indigenous Studies on Turtle Island!

These events are FREE and open to the public via Facebook Live or Zoom, Wednesdays from 11:30am – 12:30pm.

February 10th
Sharing the Land, Sharing a Future: The Legacy of the Royal Commission on Aboriginal Peoples 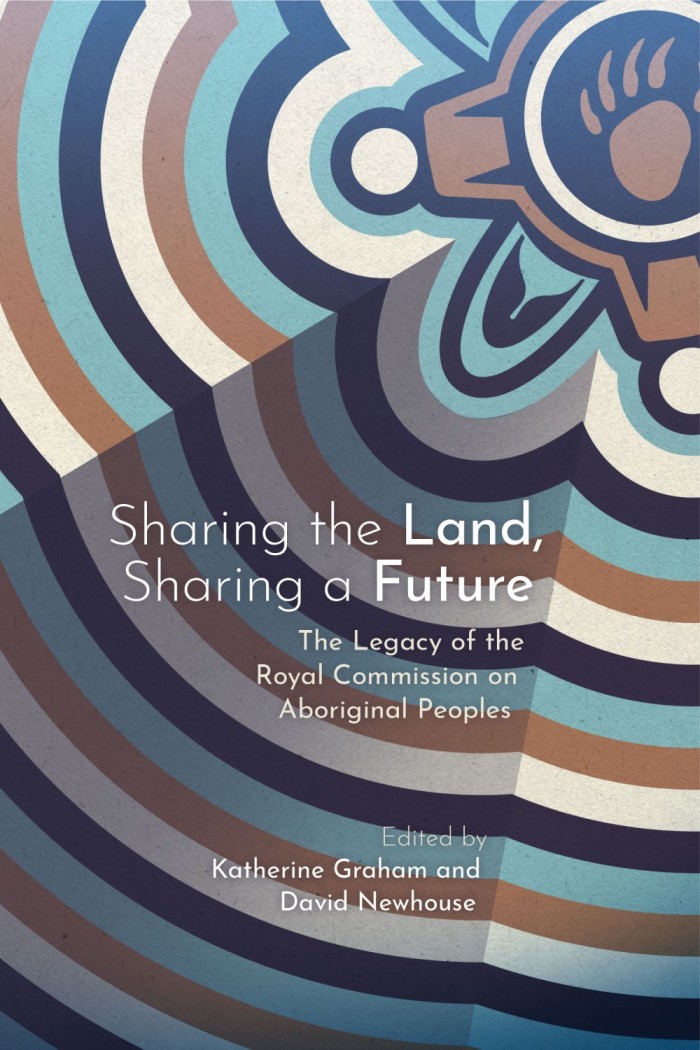 Dr. Katherine A.H. Graham has been an active scholar on Indigenous and Northern issues for over four decades. She served in several senior research and policy roles with the Royal Commission on Aboriginal Peoples.

(If you missed this talk you can watch the recorded video here.)

March 10th
Daniels v. Canada: In and Beyond the Courts 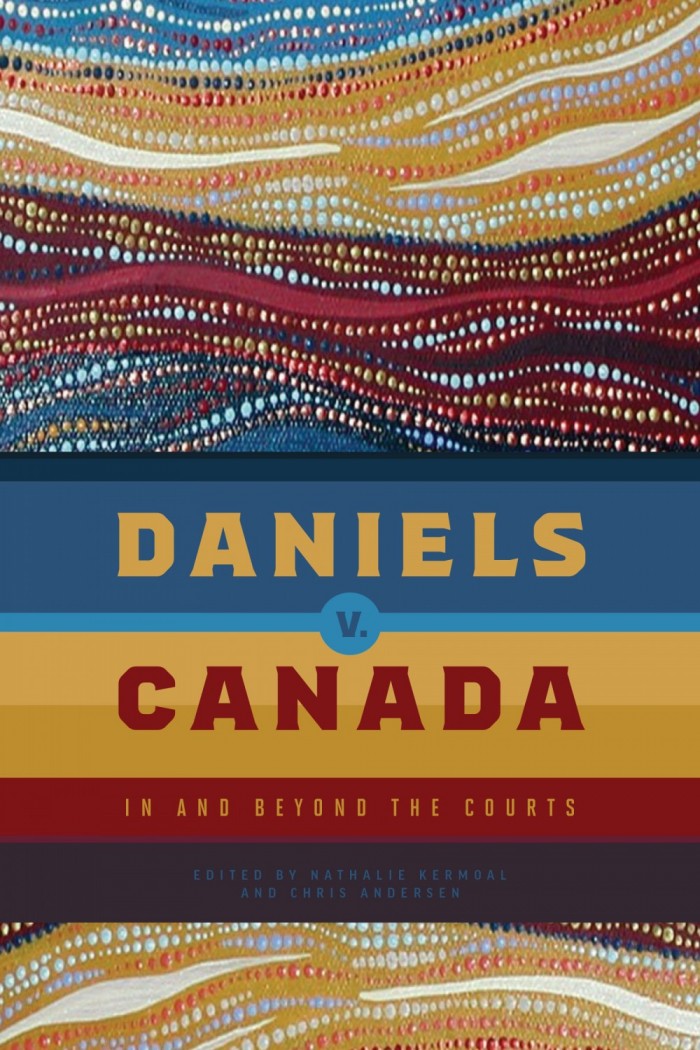 This book analyzes the impact of the case Daniels v. Canada at the Supreme Court, which determined that Métis and non-status Indians were “Indians” under section 91(24) of the Constitution Act, 1867. This represented an important court victory that has powerfully shaped Métis relationships with the federal government and continues to reverberate far beyond its immediate policy implications. Bringing together scholars and practitioners from a wide array of professional contexts, this volume demonstrates the power of Supreme Court of Canada cases to directly and indirectly shape our conversations about and conceptions of what Indigeneity is, what its boundaries are, and what Canadians believe Indigenous peoples are “owed.”

Bios:
Dr. Nathalie Kermoal is a proud Breton (a people located on the West coast of France), a professor and the Director of the Rupertsland Center for Métis Research in the Faculty of Native Studies at the University of Alberta. She holds a PhD in History from the University of Ottawa. She has published five books (among them Living on the Land: Indigenous Women Understanding of Place co-edited with Isabel Altamirano-Jimenez, Athabasca University Press) and numerous articles in academic journals and collective volumes. Her areas of research interests are Métis studies, urban Indigenous history, and Indigenous Women’s Issues. Since 2009, Nathalie is the Associate-Dean Academic of the Faculty of Native Studies.

Jason Madden is a citizen of the Métis Nation and a descendant of the ‘Halfbreeds of Rainy Lake and River’ who collectively adhered to Treaty No. 3 in 1875. He is managing partner of the law firm Pape Salter Teillet LLP and is called to the bar in Ontario, Manitoba, Alberta, the Yukon and the Northwest Territories. He has been involved much of the Métis rights litigation advanced from Ontario westward over the last 15 years, including acting as counsel in Métis harvesting rights cases such as R. v. Goodon, R. v. Laviolette, R. v. Belhumeur, R. v. Hirsekorn. In the Daniels case, he acted as counsel for the interveners Manitoba Métis Federation before the Federal Court of Appeal and for the Métis National Council before the Supreme Court of Canada.

March 17th
Did You See Us?: Reunion, Remembrance, and Reclamation at an Urban Indian Residential School 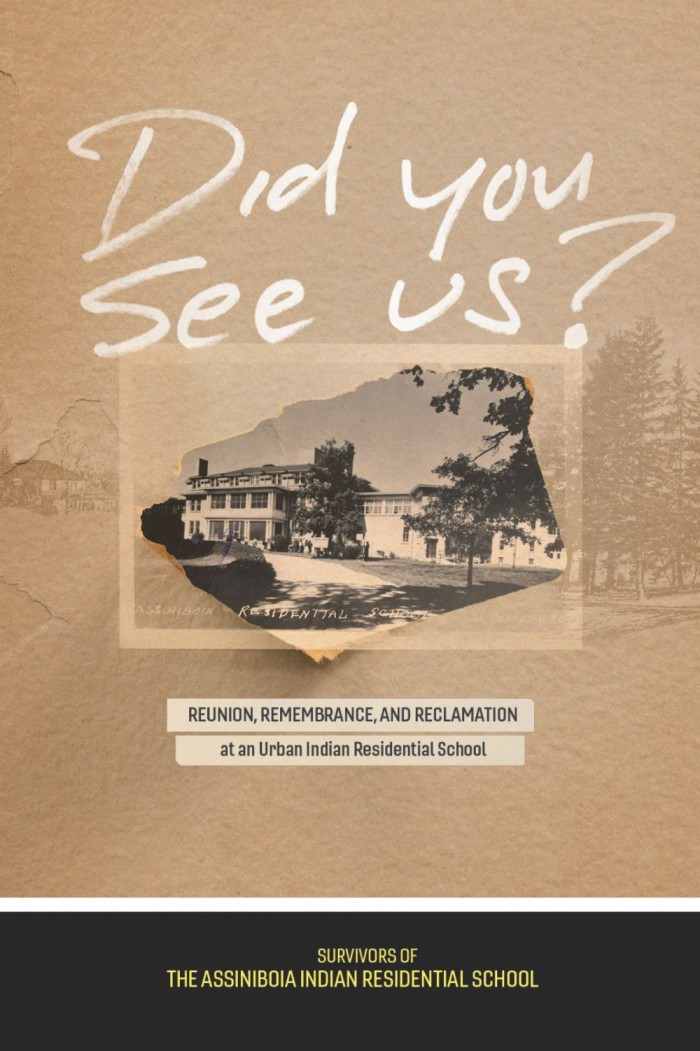 Dr. Andrew Woolford is a professor of sociology at the University of Manitoba and the author of This Benevolent Experiment: Indigenous Boarding Schools, Genocide, and Redress in the United States and Canada.