Recipes and Reciprocity: Excerpt on nutritional colonialism and Indigenous Knowledge

The following excerpt is from Hannah Tait Neufeld’s chapter of Recipes and Reciprocity: Building Relationships in Research (pages 79-95). 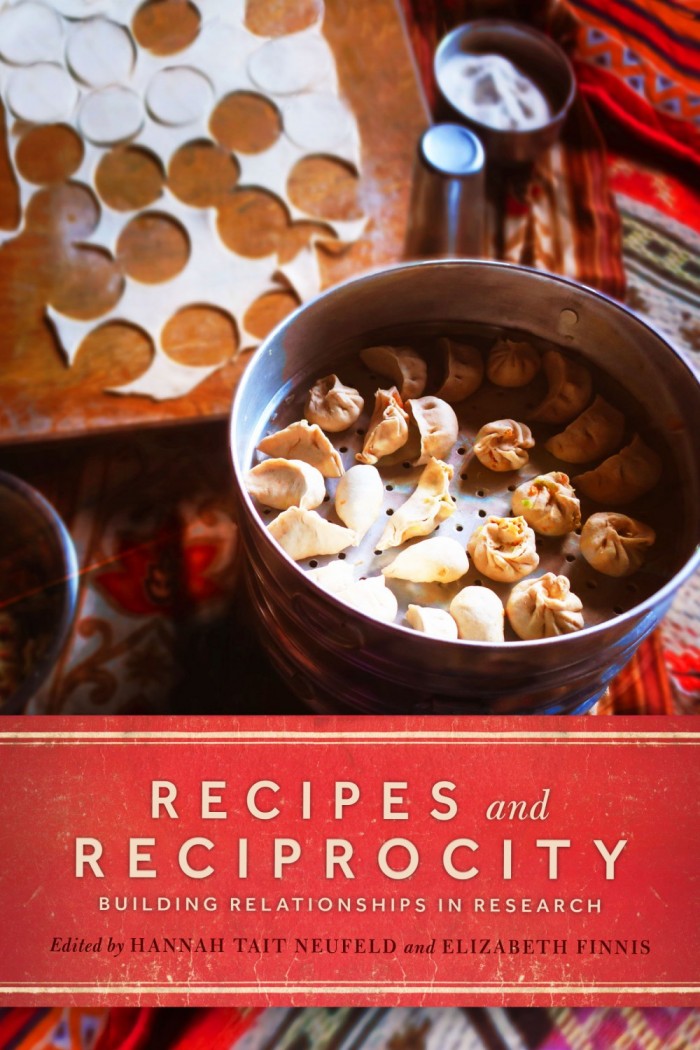 One of the first events I attended [in my postdoctoral work with the communities of Oneida and Chippewa of the Thames First Nations through programming organized through the Southwest Ontario Aboriginal Health Access Centre] was a two-day corn soup workshop. Many of the interviews with mothers had described the complex process of preparing this revered Haudenosaunee staple, but I was unprepared for the level of instruction and time required. The recipe below was shared and the process led by a member of Six Nations of the Grand River, and included the preparation of the Haudenosaunee dried white corn, which needed to be boiled for several hours with hardwood ashes to soften the husk of the kernels. In the kitchen at the Chippewa of the Thames SOAHAC site, we all watched in amazement as the white seeds turned a glowing orange colour after being submerged in the black broth.

A similar process was followed during a corn bread workshop I attended a few weeks later that was held by an Elder from Oneida Nation of the Thames. Ash baskets were used to help rinse off the wood ashes and remove the outer husk of the corn to prepare the corn to be ground, mixed with beans, and formed into beautiful bread wheels. These acts of resurgence, dedication, and wisdom provided an extended introduction to and metaphor for those Three Sisters I had helped to plant and tend all those years ago.

Have enough water in the pot to cover the corn, bring to a boil, then add the ashes. The corn will turn yellow.

Bring to a boil and simmer for approximately 2 hours, or until the skin and hulls start slipping off. Test the corn frequently by using your fingers and thumb to see if the corn is ready to drain. Drain corn with cold water until clean (skin/hull is off corn).

Cut salt pork into small pieces. Put pork and kidney beans into a medium-sized pot to boil for 3 hours, until kidney beans are done.

After kidney beans and salt pork are cooked, add all 3 ingredients together.

Simmer all ingredients together for another 30 minutes, or until ready to serve.

Corn has been described as a “cultural centre of Haudenosaunee way of life.” Corn planted with beans and squash (the Three Sisters, or Tey’o’nhekwen) as part of the agricultural system of the Haudenosaunee enabled communities to establish roots in their Territories, literally and figuratively. Providing food energy, these plants and seeds are referred to collectively as “our sustenance.” Growth of the Three Sisters from the body of Sky Woman’s daughter illustrates the growth of one body into plants that become an interdependent unit of sustenance. There are agricultural, physiological, and cultural reasons why these foods were grown together. … Corn is planted first in raised mounds to provide a structure for the beans to climb. Beans provide nitrogen to fertilize the soil, and the prickly squash vines cover the base of the mound, helping to retain soil moisture and deter pests. … Dried, these foods were easily stored for long periods of time and provided a complement of nutrients; they also taught cultural concepts of sustainability and relational interdependence.

Indigenous Knowledge refers to traditions and values that continue to uphold these teachings and practices that have allowed generations to practise healthful relationships with their natural and social environments. Many of these sustaining foods, such as the Three Sisters, are often referred to as “traditional” foods and are central to the health and well-being of Indigenous Peoples. Practices associated with their harvesting, preparation, and consumption are integral for the preservation of Indigenous Knowledge, as these foods are situated within traditional or Indigenous food systems that include the socio-cultural meanings, acquisition, processing, and planting techniques associated with their interdependency and nutrient composition.

The term “nutritional colonialism” refers to the values and practices of the dominant food system. It is characterized by cultural suppression and the removal of control over resources, along with increased rates of chronic disease conditions associated with sedentary lifestyles and dependence on wage economies. The introduction of foods often referred to collectively as the “five white sins: flour, salt, sugar, alcohol and lard,” for example, has a long history in Indigenous communities. These ingredients have become the basis of certain so-called traditional foods such as frybread and bannock, yet these foods underscore processes of dispossession and forced assimilation that have had lasting impacts on Indigenous Knowledge associated with preparing pre-contact Haudenosaunee foods such as corn bread and soups using lyed white corn, beans, and squash. These “five white sins” have also been labelled ironically as the “five white gifts,” perhaps given the non-reciprocal nature of their colonial exchange.

Agricultural traditions and the sharing of cultivated foods in Haudenosaunee culture have also been interrupted through processes of social disruption and dispossession. Elders I interviewed shared stories, for example, of the intergenerational effects of residential schools, particularly on the social structures of families and communities. Dislocation from the land and through a greater reliance on waged economies shifted families and communities away from agriculture, hunting, fishing, preparation, and preserving practices. Households became more reliant on inexpensive staples that could feed large families. One of the Elders from Oneida, a seventy-year-old woman at the time of her interview, remembered living with her seven brothers and sisters through periods of food scarcity and told the story of her grandmother, who “used to just have water with milk and this flour . . . I don’t know how she’d do it, but she’d mix it up in her hand. It would fall into [boiling water] and form a little, like an ear . . . curly stuff like that.”

In 2014, the Haudenosaunee community of Six Nations of the Grand River began an initiative with an awareness campaign to share traditional food knowledge and practices associated with healthier lifestyles. Healthy Roots was launched as a community challenge inspired by the Mohawk (Entsisewata’kari:teke) and Cayuga (Esa;do:gwe) words meaning “you will become healthy again.” The goal of the challenge was increasing access to pre-contact foods and activities, and promoting interconnectedness. Participants were encouraged to consume foods indigenous to the Territory and eliminate the “five white gifts” from their diets. At the same time, a number of gardening workshops and events were organized by Our Sustenance. At the time, Our Sustenance was an ongoing program that provided access to a greenhouse where fresh produce was available to community members, along with a community garden and farmers’ market. … As expressed by Onondaga scholar Xavier, “The concept of having a garden and growing food represent[s] the central Haudenosaunee teaching of interdependence on all levels . . . the interdependence of food, culture, and community,” beautifully illustrating the notion of reciprocity in practice.