Stet. #2: Notes from the Managing Editor

When the Shorter Oxford English Dictionary was released in 2007, the sort of people who notice the release of new dictionary took note of the disappearance of thousands of hyphens. 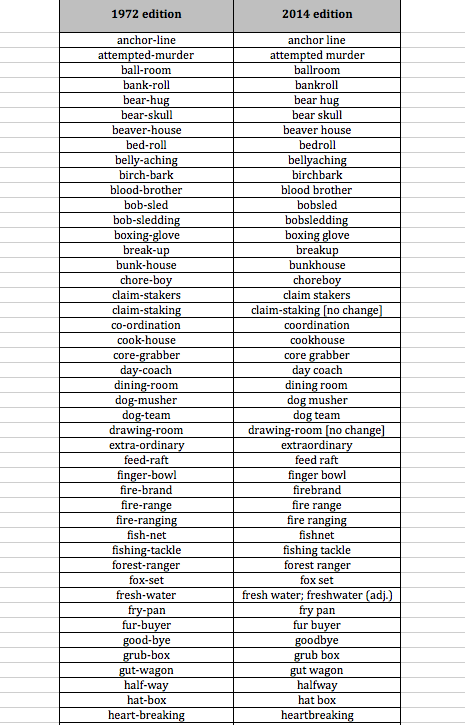 One report pointed blame at the increasing informality of written language found in e-mails and text messages. That might be the case, but the point shouldn’t be that written language is moving from order to chaos. It’s not. It’s reflecting how people actually use words, and in that way it’s communicating, for the moment at least, a little more clearly.

Language changes all the time. New words are introduced, and spellings change. This is particularly true of compound words, which move towards closed spellings the more often they get used. When I logged into my first e-mail account in 1993, I was likely going on line. By 1998, on-line had gained a hyphen. These days, it’s almost always online.

We started talking a lot about hyphens when editorial work began on UMP’s new critical edition of Devil in Deerskins.

In the 1972 edition of Anahareo’s memoir of her life with Grey Owl we found many words with unfamiliar hyphenations. In 1972 those may very well have been archaic, carried along from the previous 1940 version of the text.

Maybe that’s the way Anahareo wrote it, or perhaps those were the scrupulous suggestions of a New Press editor, following spellings in, say, the 1971 edition of Webster’s Third New International Dictionary.

In any case, Sophie McCall, the editor of the new edition of Devil in Deerskins raised the question of those hyphens.

I had noticed them when I read the first few chapters, but it wasn’t till I scoured through the manuscript for hyphens and compared the spellings to the Canadian Oxford Dictionary that I realized how pervasive those old-style spellings were. After 26 searches in the Word file for “a-”, “b-”, “c-”, etc., I found around 115 terms that we would end up changing (among them, belly-aching vs. bellyaching, claim-stakers vs. claim stakers, and pack-sack vs. packsack).

This list is the sort of type-A, close-focus that gives copy editors a reputation. Still, it’s these sorts of details that may not be so obvious on the printed page, but help provide the reader with a particular sense of the book, its feel and tone.

And, if you’re interested, here’s a partial list of Anahareo’s hyphens from A to H, anchor-line to heart-breaking.

Imagining Winnipeg shortlisted for On the Same Page Programme »