The politics of loss and survival in Anishinaabe territory 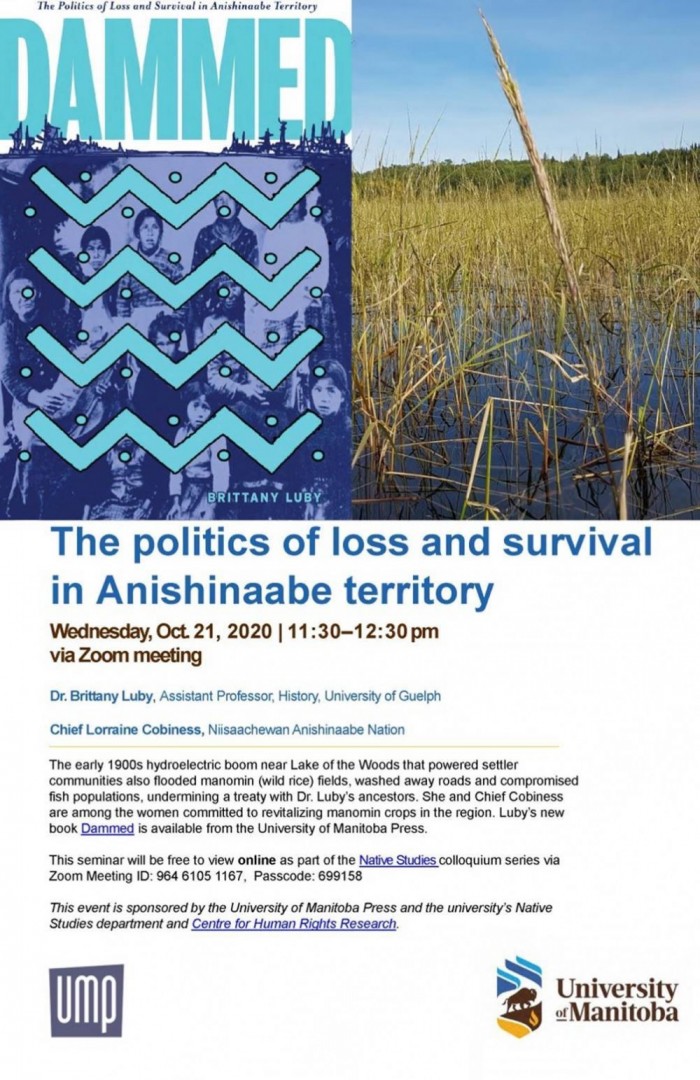 We’re so pleased to be partnering with the Department of Native Studies and the Center for Human Rights Research at the University of Manitoba on this event celebrating Brittany Luby’s book Dammed: The Politics of Loss and Survival in Anishinaabe Territory! See you October 21!

Dammed explores Canada’s hydroelectric boom in the Lake of the Woods area. It complicates narratives of increasing affluence in postwar Canada, revealing that the inverse was true for Indigenous communities along the Winnipeg River. Dammed makes clear that hydroelectric generating stations were designed to serve settler populations. Governments and developers excluded the Anishinabeg from planning and operations and failed to consider how power production might influence the health and economy of their communities. By so doing, Canada and Ontario thwarted a future that aligned with the terms of treaty, a future in which both settlers and the Anishinabeg might thrive in shared territories.

The same hydroelectric development that powered settler communities flooded manomin fields, washed away roads, and compromised fish populations. Anishinaabe families responded creatively to manage the government-sanctioned environmental change and survive the resulting economic loss. Luby reveals these responses to dam development, inviting readers to consider how resistance might be expressed by individuals and families, and across gendered and generational lines.

Luby weaves text, testimony, and experience together, grounding this historical work in the territory of her paternal ancestors, lands she calls home. With evidence drawn from archival material, oral history, and environmental observation, Dammed invites readers to confront Canadian colonialism in the twentieth century.

Brittany Luby is an award-winning historian at the University of Guelph. Her writing–both academic and creative–is intended to draw attention to social inequities in what is now known as Canada and to empower readers to envision alternate futures.

Lorraine Cobiness has over a decade of experience as Chief of Niisaachewan First Nation.

A Dedication to Lillian Shirt »