Seven years ago I never imagined that the book I would write about Anishinaabe artist Norval Morrisseau would be Mythologizing Norval Morrisseau: Art and the Colonial Narrative in the Canadian Media. 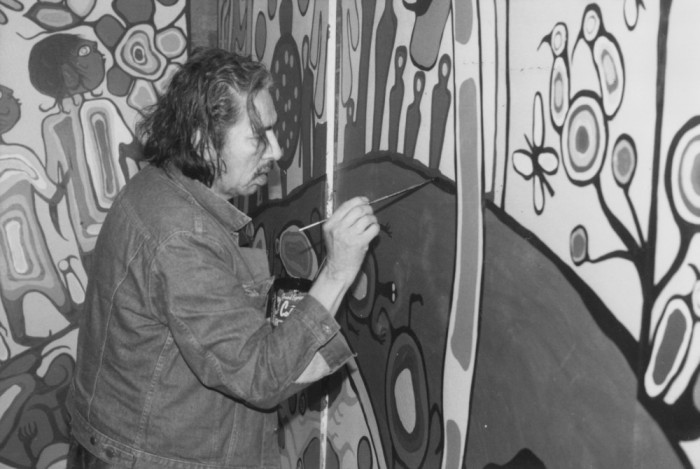 Morrisseau touches up Androgyny, prior to the 15 April 1983 gift giving ceremony and unveiling in the foyer of INAC headquarters in Gatineau, Quebec. Reproduced with permission of Indigenous and Northern Affairs Canada Aboriginal Art Centre archives.

While I fell in love with the history of art at university in the 1980s and 1990s I found little Indigenous content in the art history courses I took. I was adamant to change that. Having grown up in small town Saskatchewan in and around the Qu’Appelle valley in a family with Lakota, Métis, Scottish and French roots, we knew little about our Indigenous cultural tradition. As an adult, I wanted to change that. To study and promote Indigenous arts became both a passion and a career.

My first teaching job in 2001 was at First Nations University of Canada (then Saskatchewan Indian Federated College) in Regina, SK where I taught the entire history of Indigenous arts of the Americas, including contemporary arts.

In my scramble to find resources I quickly discovered the many, many gaps that stymied students from doing art historical research papers. Where were the art histories of Canada’s contemporary Indigenous artists? There was and still is so much work to be done. It was then that I settled on the idea to write about Morrisseau. 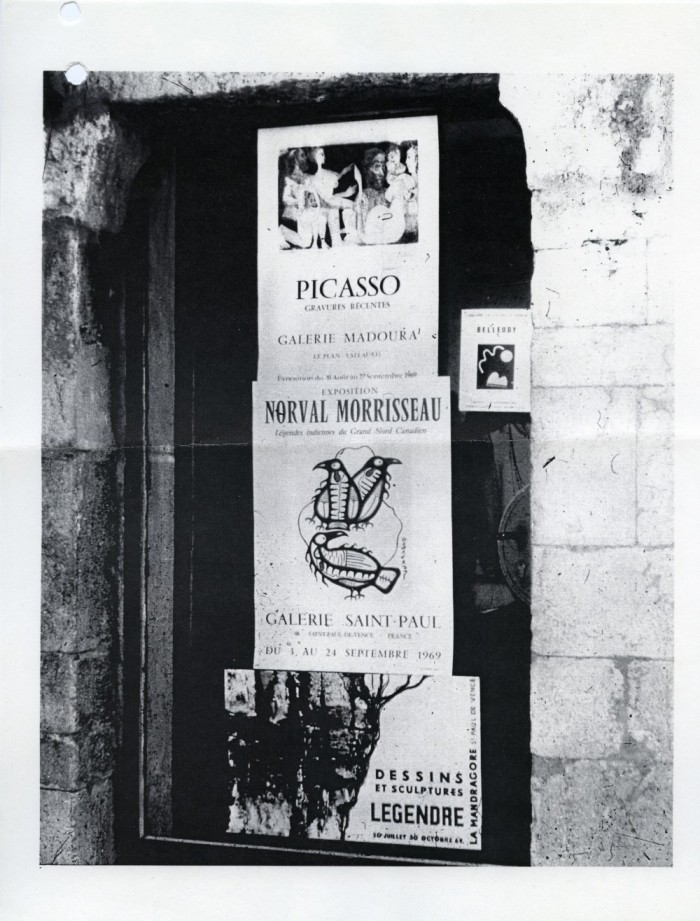 I began to research Morrisseau’s art for a fairly standard art historical treatment of a significant Indigenous artist who was clearly underrepresented in the literature. That said, while I planned to tackle how the media had represented the artist, I didn’t intend to make that my main focus. It wasn’t long before a number of roadblocks stalled the original project and left me scratching my head about how to continue. Lawsuits and more lawsuits related to Morrisseau, the estate, and forgeries clouded my efforts. Still, I would not let ongoing litigation and a lack of copyright approval for reproduction thwart the publication of a text I’d worked so hard to write.

After a couple of months of what can only be described as whingeing (an applicable British term that means to complain persistently in a peevish way) I shook off my malaise and returned to my mounting piles of research looking for new directions.

What could I write about Morrisseau when an art historical discussion of his art when printing images of the work was not possible?

That was when I hit on it. Like the serendipitous moment when a book falls off the shelf in the library and leads you in a new direction, a stack of media reports about the artist triggered a fresh start for me. A book sat waiting to be written right before my eyes—an analysis about how Morrisseau has been imagined and mythologized. Clearly this approach would be less about the artist and his art, however, and more about Canada and the Canadian art world. Having co-written Seeing Red: A History of Natives in Canadian Newspapers in 2011, I had a clear sense of a number of the larger themes present in the press reports. Canada’s media had been telling tales about him since 1962, after all, and many of those stories followed a pattern that had little to do with Morrisseau or his art.

As an art historian, I approached this media analysis from a unique perspective that differs from what might be written by a media analyst. Because so little has been published about Morrisseau in art historical circles, I found media treatment helped broaden a greater understanding of the artist and his work. As I combed through this newspaper, magazine, and documentary media coverage I began to better understand how the Canadian media viewed Morrisseau and his art as well as how Indigenous art more generally was framed.

I found reports by arts critics from daily newspapers especially insightful to my investigation because they often situated Indigenous artists (especially after 1970) in relation to modern art discourse. I discovered that the ties between mainstream abstraction, modern art, and contemporary Indigenous art to be especially useful in my understanding of Canada’s art world from the 1960s through the 1980s.

As the first Indigenous artist to break into the mainstream art market in 1962, Morrisseau, not surprisingly, bumped up against the ever-present but confining colonial narrative as he struggled to paint in his own contemporary style. In writing this book, I quickly realized that I would need to capture this discourse to better situate his art and the unconventional ways his work was collected and displayed. This is not a one-sided story, however. One of the aspects I found intriguing about this project was what an active agent Morrisseau became in shaping a number of the myths about himself and his work. Morrisseau challenged, redirected and, at times, further promulgated the myths present in the media. Since his death in 2007, his art works had often continued to exert Morrisseau’s presence.

In a nutshell, this is how I came to write Mythologizing Norval Morrisseau.