There was a moment, during a December 2007 visit to Winnipeg, that I wondered what I had got myself into. I was trudging to the City of Winnipeg Archives through a deep layer of fresh snow, the wind was whipping around me. Why could I not have taken more of an interest in, let’s say, Caribbean history?

However tempting that might have been, this project was important for me as more than just a historical exercise. After moving to Winnipeg from Alberta for university, the projects that would become this book were a way of learning the story of the city around me. It was part of making this new city feel like home. When I moved away to study at Queen’s University, I was still drawn back to continue exploring this history. And now, having returned to live in Winnipeg for nearly a decade, I still am fascinated by the stories and dynamics of this city eighty years ago. 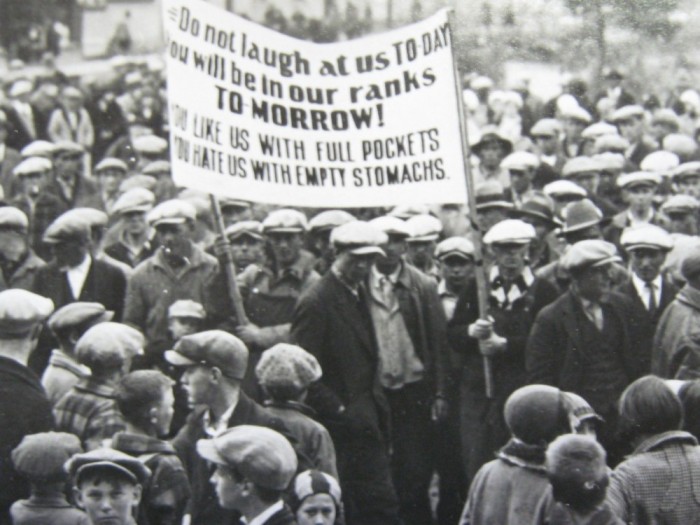 Protests by unemployed Winnipeggers were common throughout the 1930s in response to low levels of unemployment relief. (AUUC-WBA Archives)

My research has taken me to some interesting places—from the grand reading rooms of Library and Archives Canada in Ottawa to a crowded closet on the second floor of the Communist Party’s offices on Selkirk Avenue in North End Winnipeg. I have explored spy files from the RCMP, decades of mainstream and labour newspapers, minutely detailed reports from Winnipeg to the Communist International in Moscow, memoirs, oral histories, minute books, letters, advertisements, and more. From these sources I hope that I have been able to piece together a story that has largely gone untold, a story that occurred in the shadow of the internationally known events of 1919, but which I think are just as for understanding the history of this city.

One of the things that I appreciate about Winnipeg are its beautiful historical neighbourhoods. By simply ignoring the cars, I can imagine that I am seeing what the characters I studied would have seen eighty years ago (in my imagination, the elm trees have always been this large). It is interesting to walk down the streets of Winnipeg and try to imagine what certain scenes would have been like. What was Market Square like the day that communists and Nazi sympathizers fought on the streets? What would it have been like to be in a packed gymnasium, with an Independent Labour Party mayoralty candidate exhorting voters to not forget the legacy of the 1919 General Strike? What would it have been like to see hundreds or thousands of marchers coming down Main Street into downtown from the North End to celebrate May Day?

Even in this small slice of its history, Winnipeg has been home to many fascinating people and events. And while I imagine that few (while, probably almost no) Winnipeggers could identify SJ Farmer as the first labour mayor of Winnipeg or John Queen as a man who was jailed for his role in the General Strike only to become mayor of the city within two decades, these leaders, and the dynamic political movement they were part of, helped create the city that we see today.

My book focuses on a series of individuals in the Independent Labour Party and the Communist Party. In researching the book I felt like I got to know these people from eighty years ago (particular thanks in this regard goes to the RCMP, who kept close enough tabs on some leaders as to let me know what they listened to on the radio).

While I did not always agree with the tactics or rhetoric that the people in my book used, I was struck by their sincere desire to make the city a better place for marginalized, working-class Winnipeggers. These were people who struggled on the economic margins and had little, if any, say in how their city was run; people living in brutal slum conditions, with few employment opportunities, and little support from government at any level.

I now work as Program Director for Food Matters Manitoba, a charity that works for good food for all Manitobans. Winnipeg is known for its vibrant community development sector, empowering individuals and communities and creating a fairer city. While the work that occurs today may look very different than the politics or activities of Penner or Queen, I think it can be seen as part of the same narrative as we continue to answer many of the same challenges experienced eighty years ago. In this way, I find inspiration from the people in my book that can help me do my work. As I do community development work today, I can draw from the tenacity and determination of some, the pragmatic approach of others.

It is my hope that as others read about this fascinating but little known aspect of Winnipeg’s history, they too will learn from these early leaders in our city. Maybe they will have imaginings of their own, as they walk down the street wondering what this city was like eighty years ago.

Stefan Epp-Koop received an MA from Queen’s University, has won numerous awards for his scholarly work, and is the program director of Food Matters Manitoba. View books by Stefan Epp-Koop.

« The Showman and the Ukrainian Cause on 2016 Kobzar Shortlist!

“We were called greenies. What more do you need to know?” »