“A great look at the 1920s. Through his attention to detail, Jim Blanchard brings to life Winnipeg’s historical figures and makes them human and relatable. This book captures the ambivalence of the 1920s and shows how the city attempted to knit itself back together after the dramatic events of the previous decade.”

“Blanchard has a talent for putting his readers’ boots on the snowy ground and letting them see life as it was in Jazz Age. While his narrative is crowded with members of Winnipeg’s elite the author excels when he tells the stories of regular citizens while framing them in the context of the era’s events and trends.”

“Reading Blanchard made me want to revisit Winnipeg.”

“Like Blanchard’s other books, A Diminished Roar falls between the scholarly and the popular, more episodic and descriptive than analytical but based on solid research and written in a tone that makes it accessible to the general reader. It is also nicely illustrated with a rich selection of archival photos and maps. More importantly, the book fills a large gap since there has been so little written about the city’s history after 1919. Blanchard reveals many ignored or forgotten facets of life in Winnipeg in the 1920s, and one hopes for an eventual sequel dealing with the 1930s.” 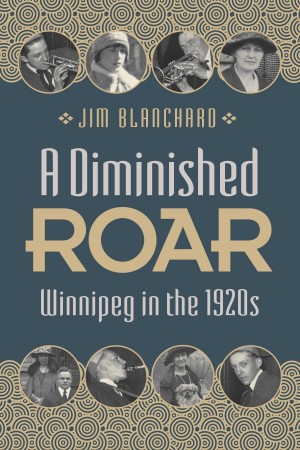