The Canadian Government and the Residential School System

With the conclusion of the Truth and Reconciliation Commission, more Canadians than ever are aware of the ugly history of Canada’s residential schools. Nearly twenty years earlier, UMP published John Milloy’s A National Crime, a groundbreaking history of the schools that exposed details of the system to thousands of readers.

Using previously unreleased government documents accessed during his work for the Royal Commission on Aboriginal Peoples, A National Crime was one of the first comprehensive studies of the history of residential schools, and it remains a powerful indictment of the racist and colonial policies that inspired and sustained them. A National Crime convincingly argues that, rather than bringing Indigenous children into what its planners called “the circle of civilization,” the schools more often provided an inferior education in an atmosphere of neglect, disease, and abuse.

As UMP marks its fifth decade, and Canada struggles towards truth and reconciliation, it is fitting to reissue A National Crime —one of our most influential publications and a cornerstone of our Indigenous studies list—with a new foreword by a scholar in the vanguard of Indigenous historians in Canada.

Mary Jane Logan McCallum’s foreword sets the story of A National Crime in the context of Indigenous historiography and her own family history, from the broad level of national Indian policy to its impact on individual lives lived.

“One of the 100 most important Canadian books ever written.”

“Milloy’s book should be mandatory reading for all citizens of the Americas.”

– The Globe and Mail

John Milloy is a professor emeritus in the departments of Native Studies and History, and Master of Peter Robinson College, Trent University, Peterborough, Ontario. 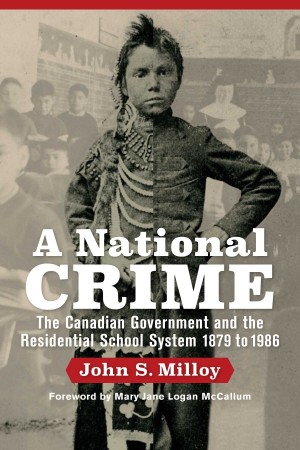