The Cultural and Economic Politics of Recognition

In AboriginalTM, Jennifer Adese explores the origins, meaning, and usage of the term “Aboriginal” and its displacement by the word “Indigenous.” In the 1982 Constitution Act, the term’s express purpose was to speak to specific “aboriginal rights”. Yet in the wake of the Constitution’s passage, Aboriginal, in its capitalized form, was increasingly used to describe and categorize people.

More than simple legal and political vernacular, the term Aboriginal (capitalized or not) has had real-world consequences for the people it defined. AboriginalTM argues the term was a tool used to advance Canada’s cultural and economic assimilatory agenda throughout the 1980s until the mid-2010s. Moreover, Adese illuminates how the word engenders a kind of “Aboriginalized multicultural” brand easily reduced to and exported as nation brand, economic brand, and place brand—at odds with the diversity and complexity of Indigenous peoples and communities.

In her multi-disciplinary research, Adese examines the discursive spaces and concrete sites where Aboriginality features prominently: the Constitution Act, 1982; the 2010 Vancouver Olympics; the “Aboriginal tourism industry”; and the Vancouver International Airport. Reflecting on the term’s abrupt exit from public discourse and the recent turn toward Indigenous, Indigeneity, and Indigenization, AboriginalTM offers insight into Indigenous-Canada relations, reconciliation efforts, and current discussions of Indigenous identity, authenticity, and agency.

Jennifer Adese is Otipemisiwak/Métis and is the Canada Research Chair in Métis Women, Politics, and Community and an Associate Professor in the Department of Sociology at University of Toronto Mississauga (UTM). She is the co-editor, with Chris Andersen, of A People and a Nation: New Directions in Contemporary Métis Studies. 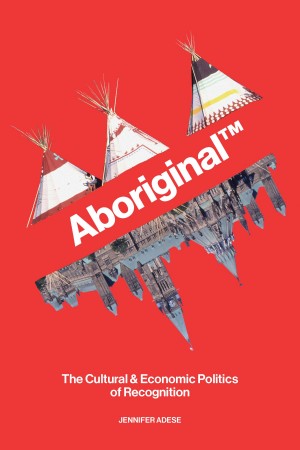