After Identity features twelve interdisciplinary essays from scholars who see Mennonite writing transitioning beyond a tradition concerned primarily with defining itself and its cultural milieu. Contributors explore the histories and contexts—as well as the gaps—that have informed and diverted the perennial focus on identity in Mennonite literature, even as that identity is reread, reframed, and expanded. Individually, each chapter engages the question of identity in some distinct way; collectively, they show something of the range in tone, methodology, and perspective that characterizes the broader field of Mennonite literary criticism.

Together, the essays in this volume interrogate what is at stake in this ongoing preoccupation with identity and explore the potential for a move towards a truly post-identity literature. As such, After Identity participates in a much larger reconsideration of cultural identity currently under way in contemporary literary studies, a discussion with implications for the study of ethnic literatures more generally.

“An excellent and inspiring collection.”

“The world of Mennonite writing in North America is a lively and fascinating one that pushes into new territory even while it seeks to attend to its own histories, traditions, and communities—this collection of essays is a reliable guide to understanding that state of affairs.”

“For readers interested in the Mennonite thing, all of the pieces of this collection are well worth viewing.”

“When a traditional culture enters into a part of the modern, secular realm (academia), how does that traditional culture maintain its sense of identity? After Identity does not attempt to offer simplistic answers to these questions, but it does a superb job of mining the multiple issues that confront the field of Mennonite literature as it attempts to define itself.”

“The twelve essayists in Robert Zacharias’s After Identity share in the larger cultural desires to surpass taxonomic or binary thinking, and their collective contributions inquire carefully and seriously into the meaning and the value of the categories of identity such as Mennonite and Mennonite writing.”

Robert Zacharias is a Banting Postdoctoral Fellow in the Department of English Language and Literature at the University of Waterloo, and a Visiting Scholar with the Centre for Diaspora and Transnational Studies at the University of Toronto. He is the associate editor of the Journal of Mennonite Studies, and co-editor, with Smaro Kamboureli, of Shifting the Ground of Canadian Literary Studies.  Visit Robert’s website. 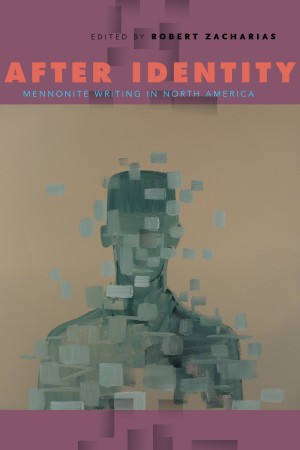