Told by Paul Moss (1911-1995), a highly respected storyteller and ceremonial leader, these twelve texts introduce us to an immensely rich literature. As works of an oral tradition, they had until now remained beyond the reach of those who do not speak the Arapaho language.

Here, for the first time, these outstanding examples of indigenous North American literature are printed in their original language (in the standard orthography used on the Wind River Reservation) but made accessible to a wider audience through English translation and comprehensive introductions, notes, commentaries and an Arapaho-English glossary.

The Arapaho traditions chosen for this anthology tell of hunting, scouting, fighting, horse-stealing, capture and escape, friendly encounters between tribes, diplomacy and war, conflict with the U.S. and battles with its troops. They also include accounts of vision quests and religious rites, the fate of an Arapaho woman captured by Utes, and Arapaho uses of the “Medicine Wheel” in the Bighorn Mountains.

Andrew Cowell is professor of linguistics and literature at the University of Colorado and author of At Play in the Tavern: Signs, Coins and Bodies in the Middle Ages (1999); he has published widely — in print, audio and video — in the field of Arapaho language, culture and verbal performance.

Alonzo Moss, Sr. is Co-Chair of the Northern Arapaho Language and Culture Commission. He has lived with these stories all his life and has been working on the publication of his fatherís texts for the past two decades. 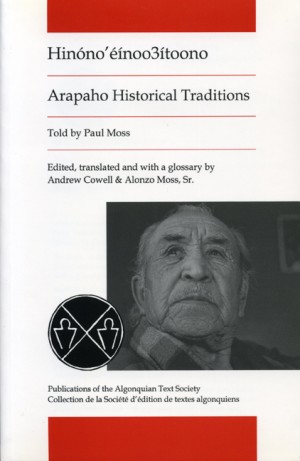