This volume offers a unique blend of personal memoirs of “survivors” and their descendants, alongside the work of community activists, public historians, and scholars, all of whom raise questions about how and why in Canada basic civil liberties have been (and, in some cases, continue to be) denied to certain groups in times of perceived national crises.

“Readers are challenged to reconsider internment’s significance and to accept that it embraces a variety of cultural, ethnic, political groups and individuals and the differing manner with which they were dealt. […] These essays bring refreshing approaches to the subject matter and a promise of dynamic future research.”

“Hinther and Mochoruk believe this searing tale – in addition to others – serve as a “powerful reminder” of the “fragility of civil liberties and human rights,” as well as a stand-in for a larger, more contested discussion on internment over the span of Canada’s history. […] The editors very much want readers to understand that Canada, despite all of the adulation it often receives in global diplomatic circles these days, had a “rich and shameful” record on these very civil right and liberties via civilian internment—defined as the detention as a prisoner without formal charge and conviction, almost always for political or military reasons.”

“Many of the chapters—including Christine Whitehouse’s on the ambivalent sexualities of Jewish refugees, Judith Kestler’s on the positive reminiscences of interned German merchant marines, and Franca Iacovetta’s on the “risky business” of complicating a community’s understanding of its internment—are fascinating and, at least to this reader, novel.”

“The collection reminds us to be cognizant that civilian internment is a human rights concern and is often the result of bypassing civilian liberties for the sake of national security. This is an important work that will remind a wide range of readers that human rights violations are not mere memories of a distant past, but they continue to shape our society today.”

Rhonda L. Hinther is an Associate Professor of History at Brandon University and an active public historian. Prior to joining BU, Hinther served as Director of Research and Curation at the Canadian Museum for Human Rights and, before that, as Curator of Western Canadian History at the Canadian Museum of History. Her most recent book, a 2019 Wilson Prize Finalist, is entitled Perogies and Politics: Canada’s Ukrainian Left, 1891-1991 (2018). 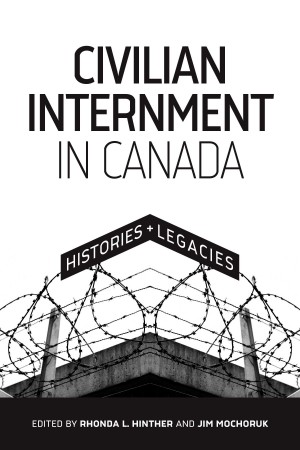