Compelled to Act showcases fresh historical perspectives on the diversity of women’s contributions to social and political change in prairie Canada in the twentieth century, including but looking beyond the era of suffrage activism. In our current time of revitalized activism against racism, colonialism, violence, and misogyny, this volume reminds us of the myriad ways women have challenged and confronted injustices and inequalities.

The women and their activities shared in Compelled to Act are diverse in time, place, and purpose, but there are some common threads. In their attempts to correct wrongs, achieve just solutions, and create change, women experienced multiple sites of resistance, both formal and informal. The acts of speaking out, of organizing, of picketing and protesting were characterized as unnatural for women, as violations of gender and societal norms, and as dangerous to the state and to family stability.

“Compelled to Act adds richness to what we know about women’s activism in Western Canadian agrarian, labour, socialist, and conservative politics in the early-to-mid twentieth century. It also provides much needed scholarship on women’s political activism at the state and grassroots level after 1960.”

“This is a wonderful collection about women’s activism in Western Canada. Connecting community and international politics, women played leading roles in all aspects of political organizing on the prairies. These inspiring stories should compel us to action!”

“For years, Canadian women have found themselves in the middle of community crises and responded to them, often challenging the status quo to change what they saw as wrong. In Compelled to Act: Histories of Women’s Activism in Western Canada, a variety of contributors tell the stories of women who have confronted a range of issues and helped influence the course of history and life in western Canada.”

“This highly readable volume offers 10 original essays that explore diverse kinds of political engagements across the 20th century. Compelled to Act is an engaging read that inspires new questions. It is a wonderful addition to an important field.”

“Compelled to Act is a fine contribution to women’s and regional history. Digging deep into particular places and people, the volume adds up to a powerful, on-the-ground investigation of twentieth-century women’s activism in all its messiness. It will hopefully inspire others to carry on, uncovering more stories about women’s roles in community building in all its diversity, breadth, depth and surprising twists and turns.”

Nanci Langford is Academic Coordinator, Master of Arts in Interdisciplinary Studies, at Athabasca University. She co-chairs the Alberta Women’s Memory Project, an online resource on Alberta women for students and the general public. 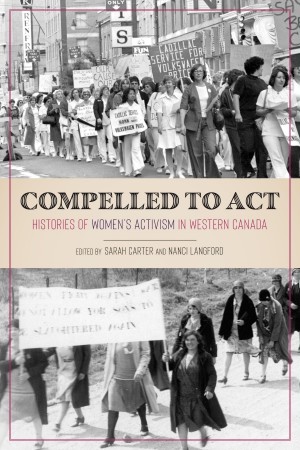