Dadibaajim narratives are of and from the land, born from experience and observation. Invoking this critical Anishinaabe methodology for teaching and learning, Helen Agger documents and reclaims the history, identity, and inherent entitlement of the Namegosibii Anishinaabeg to the care, use, and occupation of their Trout Lake homelands.

When Agger’s mother, Dedibaayaanimanook, was born in 1922, the community had limited contact with Euro-Canadian settlers and still lived throughout their territory according to seasonal migrations along agricultural, hunting, and fishing routes. By the 1940s, colonialism was in full swing: hydro development had resulted in major flooding of traditional territories, settlers had overrun Trout Lake for its resource, tourism, and recreational potential, and the Namegosibii Anishinaabe were forced out of their homelands in Treaty 3 territory, north-western Ontario.

Agger mines an archive of treaty paylists, census records, and the work of influential anthropologists like A.I. Hallowell, but the dadibaajim narratives of eight community members spanning three generations form the heart of this book. Dadibaajim provide the framework that fills in the silences and omissions of the colonial record. Embedded in Anishinaabe language and epistemology, they record how the people of Namegosibiing experienced the invasion of interlocking forces of colonialism and globalized neo-liberalism into their lives and upon their homelands. Ultimately, Dadibaajim is a message about how all humans may live well on the earth.

“Dadibaajim is brilliant in its unapologetic incorporation of Anishinaabemowin and its prioritizing of Anishinaabe way of being in the world. It contributes to important decolonial work and challenges settler histories and discourse.”

– Brittany Luby and Margaret Lehman of the Manomin Project

“Dadibaajim is the product of a lifetime of reflection, and the distilled narrative we are presented shares an invaluable part of our Anishinaabe—and larger human—story that might have otherwise never been told. This work brings new value and appreciation for the role and positionality of our senior and traditional Elders, our Indigenous languages, and knowledge building customs and protocols that are inherent to the community.”

Helen Olsen Agger is Anishinaabe and holds a PhD in Native Studies from the University of Manitoba. She is the author of Following Nimishoomis: The Trout Lake History of Dedibaayaanimanook Sarah Keesick Olsen. 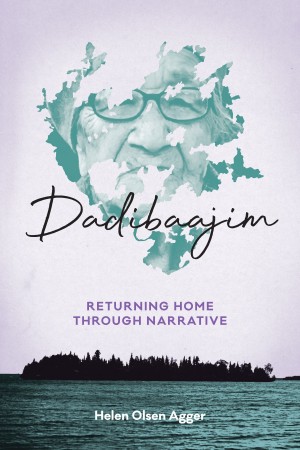