In and Beyond the Courts

In Daniels v. Canada the Supreme Court determined that Métis and non-status Indians were “Indians” under section 91(24) of the Constitution Act, 1867, one of a number of court victories that has powerfully shaped Métis relationships with the federal government.

However, the decision (and the case) continues to reverberate far beyond its immediate policy implications. Bringing together scholars and practitioners from a wide array of professional contexts, this volume demonstrates the power of Supreme Court of Canada cases to directly and indirectly shape our conversations about and conceptions of what Indigeneity is, what its boundaries are, and what Canadians believe Indigenous peoples are “owed.”

Attention to Daniels v. Canada’s variegated impacts also demonstrates the extent to which the power of the courts extend and refract far deeper and into a much wider array of social arenas than we often give them credit for. This volume demonstrates the importance of understanding “law” beyond its jurisprudential manifestations, but it also points to the central importance of respecting the power of court cases in how law is carried out in a liberal nation-state such as Canada.

Join us in collaboration with the Rupertsland Centre for Métis Research for the VIRTUAL LAUNCH on May 17th at 2pm CST!

“Articulate, thoughtful, provocative assessments of how we might assess the Supreme Court’s 2016 decision regarding the Metis People’s legal status in Canada.”

“This important collection of original pieces focusing on Daniel’s v. Canada and the Supreme Court’s decision will have an impact for years to come. Reader’s will appreciate the diverse areas of expertise found in this volume, including Indigenous leadership, political activism, sociology, law, and anthropology.”

Nathalie Kermoal is a professor in the Faculty of Native Studies at the University of Alberta and Director of Rupertsland Centre for Métis Research. Her latest book is Living on the Land: Indigenous Women’s Understanding of Place, which she co-edited with Isabel Altamirano-Jimenez.

Chris Andersen is a professor in the Faculty of Native Studies at the University of Alberta and the editor of Aboriginal Policy Studies. He is the author of “Métis”: Race, Recognition and the Struggle for Indigenous Peoplehood. 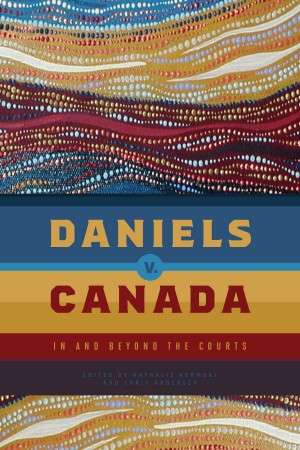