The Power of French-Indigenous Families in the Eighteenth Century

French-Indigenous families were a central force in shaping Detroit’s history. Detroit’s Hidden Channels examines the role of these kinship networks in Detroit’s development as a site of singular political and economic importance in the continental interior. Situated where Anishinaabe, Wendat, Myaamia, and later French communities were established and where the system of waterways linking the Atlantic Ocean to the Gulf of Mexico narrowed, Detroit’s location was its primary attribute.

While the French state viewed Detroit as a decaying site of illegal activities, the influence of the French-Indigenous networks grew as members diverted imperial resources to bolster an alternative configuration of power relations that crossed Indigenous and Euro-American nations. Women furthered commerce by navigating a multitude of gender norms of their nations, allowing them to defy the state that sought to control them by holding them to European ideals of womanhood.

By the mid-eighteenth century, French-Indigenous families had become so powerful, incoming British traders and imperial officials courted their favour. These families would maintain that power as the British imperial presence splintered on the eve of the American Revolution.

Detroit’s Hidden Channels is an insightful social analysis of the French-Indigenous community that evolved with Cadillac’s founding of this frontier trading center. Long subsumed by nationalistic histories about this region, Marrero’s gender analysis uncovers both the power of these interwoven kin networks and the role that Indigenous women played in forging these kin linkages that controlled the course of events. This is a must-read for early American historians and for anyone wishing to know more about the ‘real’ history of early Detroit.

“In this meticulous and sophisticated analysis of Detroit’s founding era, Marrero offers an important rejoinder to standard imperial histories by parting the curtains for us to see, with more clarity and precision than we have before, the place of Indigenous and French women in the making of Detroit. Methodically clawing away at French and English colonial records, Indigenous sources, oral histories, and even folk songs, she exposes at every turn the scattered traces of individual women, and reveals the gender dynamics instrumental in establishing the far-ranging networks of trade and kinship that were the building blocks of empire. A masterful study.”

“Marrero is to be commended for overcoming difficult historical problems by a thoughtful and insightful use of language and geography. Her reintegration of genealogy into ‘standard history’ is an excellent contribution and one which brings her work to life.”

“[Marrero charts] family networks, all linked to Detroit, that span several generations and cover vast distances from Illinois to Montreal. She harnesses this evidence in close readings of received narratives, using both textual analysis and historiographical reflection, offering a reconsideration of such disparate matters as the founding of Detroit, the origins of the Meskwaki wars, the eighteenth-century expansion of Indigenous enslavement, the outbreak of the so-called Pontiac’s War, and even the success of the Lewis and Clark expedition. At a deeper register, she considers the workings of empire. Archivally astute, critically trained, and aware of scholarly developments, Marrero, with honesty and clarity, speculates openly about what might fill gaps in her record.”

“Through careful research [Marrero] resurrects the disregarded history of French and Indigenous women’s importance in the creation of Detroit and the empires and Indigenous nations who struggled for it. Detroit’s Hidden Channels uniquely adds to the scholarship on empire, histories of gender and empire, Indigenous-settler relations, family history, and urban Indigenous history.

Karen L. Marrero is Assistant Professor of early North American History at Wayne State University. She is a comparative and transnational historian of the United States and Canada whose work examines interactions between seventeenth-, eighteenth-, and early nineteenth-century Indigenous peoples and Euro-Americans in the Great Lakes. 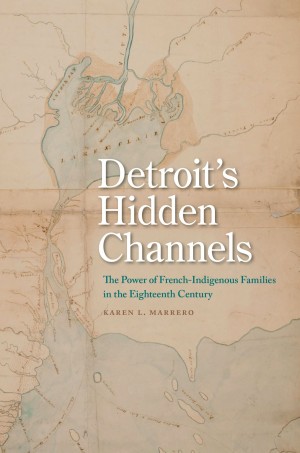