For a Better World

The Winnipeg General Strike and the Workers’ Revolt

Canada’s largest and most famous example of class conflict, the Winnipeg General Strike, redefined local, national, and international discourse around class, politics, region, ethnicity, and gender. The Strike’s centenary occasioned a re-examination of this critical moment in working-class history.

Continuing the conversations begun in 2019, Editors Naylor, Hinther, and Mochoruk depict key events of 1919, detailing the dynamic and complex historiography of the Strike and the larger Workers’ Revolt that reverberated around the world and shaped the century following the war. The chapters delve into intersections of race, class, and gender and into settler colonialism’s impact on the conflict. Placing the struggle in Winnipeg within a broader national and international context, several contributors explore parallel strikes in Edmonton, Crowsnest Pass, Montreal, Kansas City, and Seattle.

For a Better World interrogates types of commemoration and remembrance, current legacies of the Strike, and its ongoing influence. Together, the essays in this collection demonstrate that the Winnipeg General Strike continues to mobilize—revealing our radical past and helping us to think imaginatively about collective action in the future.

“The editors have skilfully woven together historical inquiries that move beyond the superficial analysis of what happened [during the conflict of 1919], and why, to a more critical look at who has been left out of the historical conversation, what has changed (if anything) and how local struggles for social justice don’t occur in political vacuums. For a Better World asks the reader to contemplate on what it might take to make a more just society.”

James Naylor is the author of The Fate of Labour Socialism: The Co-operative Commonwealth Federation and the Dream of a Working-Class Future (2016). He is a professor of history at Brandon University.

Rhonda L. Hinther is a professor in the Department of History at Brandon University, and an active public historian. Prior to joining BU, she served as Director of Research and Curation at the Canadian Museum for Human Rights and, before that, as Curator of Western Canadian History at the Canadian Museum of History. She is the author of Perogies and Politics: Canada’s Ukrainian Left, 1891-1991 (UTP, 2018) and co-editor, with Jim Mochoruk, of Civilian Internment in Canada: Histories and Legacies (UMP, 2020). 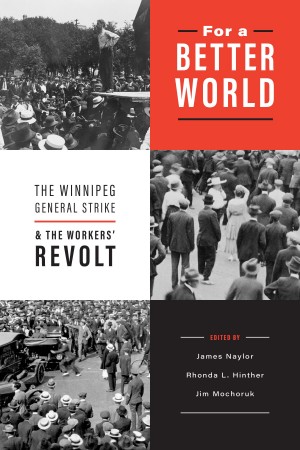