For All We Have and Are

Regina and the Experience of the Great War

The First World War profoundly affected every community in Canada. In Regina, the politics of national identity, the rural myth, and the social gospel all lent a distinctive flavour to the city’s experience of the Great War. For many Reginans, the fight against German militarism merged with the struggle against social evils and the “Big Interests,” adding new momentum to the forces of social reform, including the fights for prohibition and women’s suffrage.

James M. Pitsula traces these social movements against the background of the lives of Regina men who fought overseas in battles such as Passchendaele and Vimy Ridge. Skillfully combining vivid detail with the larger social context, For All We Have and Are provides a nuanced picture of how one Canadian community rebuilt both its realities and myths in response to the cataclysm of the “war to end all wars.”

“This is a very fine book that fills an important gap in the historiography of the West, cities at war, and the wartime experience of Canadians on the home front. It combines social history with the larger national experience of the war, and presents much that is new and exciting.”

“With Pitsula’s focus on local issues and controversies, the war emerges as a multi-purpose catalyst for changes both cruel and humane, most of them with roots in pre-war society but all of them enhanced by a wartime rhetoric of sacrifice and self-denial. Pitsula’s multi-faceted approach sets a high standard for local historians and should be welcomed as a model.”

“[This] book should be welcomed, for it provides a wealth of information about the ways the war affected ethnic and class relations, gender identity, Canadian citizenship, social movements, and politics. For All We Have And Are contextualizes these issues in a regional centre and provincial capital convinced its success depended on a wheat economy sucked dry by the ‘Big Interests’ in Ottawa, Toronto, and Montreal. The Anglo-Canadian majority in the city of 30,000 were also convinced of the superiority of the ‘British civilization’ to which they belonged. Pitsula’s exploration of the way the war emboldened this ethno-cultural bias and its consequences for the large proportion of non-British immigrants in the city (many of whom lived in Regina’s ‘Germantown’) and province is one of the book’s major strength’s.”

“Between the battlefield and the home front, Regina contributed policies, produce, and people to Canada’s war effort. The city was affected by many of the same issues that faced the rest of the nation: loyalty of immigrants, maximizing production, conscription, and social reform movements. Though unique in many ways, Pitsula demonstrates that the city was trying to adhere to emerging Canadian ideals and values. For this reason, For All We Have and Are is not only an in-depth study of Regina and Saskatchewan in the First World War, but an accurate look at the Canadian war experience.”

“Pitsula examines the social, political, industrial, and military contributions of the growing Canadian prairie city throughout the First World War. Although the focus of the book is Regina, the author consistently contextualizes the city’s Great War experience by relating it to the larger provincial, national and global spheres…For this reason, For All We Have and Are is not only an in-depth study of Regina and Saskatchewan in the First World War, but an accurate look at the Canadian war experience.”

James M. Pitsula is a professor of Canadian history at the University of Regina. He is the author of five books in political and social history. 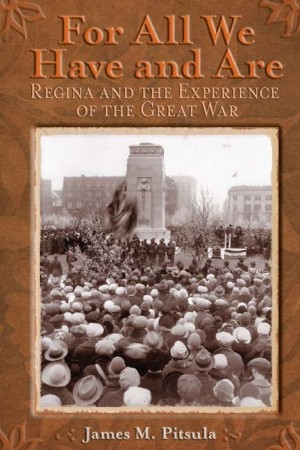