Canadians have an ambivalent feeling towards the North. Although climate and geography make our northern condition apparent, Canadians often forget about the north and its problems. Nevertheless, for the generation of historians that included Lower, Creighton, and Morton, the northern rivers, lakes, forests, and plains were often seen as primary characters in the drama of nation building. W.L. Morton even went so far as to write that the “main task of Canadian life has been to make something of that formidable heritage” of the northern Canadian shield. For many politicians and developers, “to make something” of the North came to mean thinking of the North as an empty hinterland waiting to be exploited, and today, hydroelectric projects, mining, milling, pulp and paper, and other industries have changed much of the North beyond recognition.

One of the first parts of the North to be aggressively industrialized was northern Manitoba. When all of Manitoba was given in 1670 to a group of entrepreneurs, a precedent was set that was replicated throughout the province’s history. After the province entered confederation in 1870, provincial politicians and business leaders began to look to the northern resources as a new key to the provinceís economic development. Particularly after 1912, they saw resource development in the North as a strategy to expand the provincial economy from its agricultural base. Jim Mochoruk shows how government and business worked together to transform what had been the exclusive fur-trading preserve of the Hudson’s Bay Company into an industrial hinterland. He follows the many twisting paths established by developers and politicians as they chased their goal of economic growth, and recounts the ultimate costs of development in economic, ecological, and political terms.

“This volume forms a splendid addition to all libraries about the prairies and northern development. It will appeal not only to historians, but also to a wide readership in fields of political science, cultural resources, historical geography and aboriginal studies.” 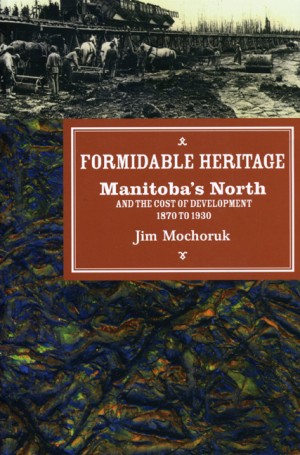