Canadian Farmers and the Politics of Genetically Modified Wheat

In 2004 Canadian farmers led an international coalition to a major victory for the anti-GM movement by defeating the introduction of Monsanto’s genetically modified wheat. Canadian farmers’ strong opposition to GM wheat marked a stark contrast to previous producer acceptance of other genetically modified crops. By 2005, for example, GM canola accounted for 78% of all canola grown nationally. So why did farmers stand up for wheat?

In Growing Resistance, Emily Eaton reveals the motivating factors behind farmer opposition to GM wheat. She illustrates wheat’s cultural, historical, and political significance on the Canadian prairies as well as its role in crop rotation, seed saving practices, and the economic livelihoods of prairie farmers.

Through interviews with producers, industry organizations, and biochemical companies, Eaton demonstrates how the inclusion of producer interests was integral to the coalition’s success in voicing concerns about environmental implications, international market opposition to GMOs, and the lack of transparency and democracy in Canadian biotech policy and regulation.

Growing Resistance is a fascinating study of successful coalition building, of the need to balance local and global concerns in activist movements, and of the powerful forces vying for control of food production.

“The historical and cultural significance of wheat is familiar to Canadians, and has been more deeply embedded by the industry’s value to the Canadian economy. Farmers’ resistance to the market-based solutions offered by GM wheat advocates represents a unique experience, but Growing Resistance contains lessons that are applicable to other crops and the global anti-GM movement. Future struggles can learn from the way in which organizations with differing and even opposing points of view can work together and find common ground to protect a shared interest.”

“Objective and highly readable, avoiding much of the philosophy and science jargon used in other issues-related books. Highly recommended.”

“Growing Resistance is as much a study of the culture and behaviour of farmers as it is the story of wheat. The book is aimed at the average reader who has an interest in the politics of food. But it could also be used as a reference book.”

“The saga of genetically modified wheat in Canada is a fascinating story revealing the conflicting producer, agribusiness and consumer interests that emerge when scientific discoveries affect the way we grow and market food. Growing Resistance has an engaging story to tell and a great deal to recommend it…”

“Emily Eaton’s book is must read for those interested in both farming and wheat. It is also a lesson and a reminder for environmentalists and farmers, that working together can be lead to powerful victories.”

“Grown from the seed of an academic paper, the new book Growing Resistance is part whodunit, part cultural examination, part celebration of the power of Prairie farmers and part condemnation of big business’s role in agriculture.”

“This is a unique and important work. The preponderance of discussion on GM resistance has focused on consumer/health, environmental and economic issues. This work, by focusing on farmers’ perspectives, is exploring new territory, opening questions, giving insights into a different kind and level of thought and argument in the field.”

“The short history of genetically modified (GM) crops in Canada has been defined by controversy, debates about health and environmental concerns, and deeply entrenched corporate control. The past fifteen years have seen numerous approvals of new GM crop varieties, while just a handful have been stopped from reaching the market. One of these unusual cases is the subject of Emily Eaton’s new book Growing Resistance. […] Although Growing Resistance focuses largely on a story that played out over a decade ago, it clearly remains both relevant and timely, and is a valuable contribution to a debate that is far from over.”

“Growing Resistance teaches the value of connecting local histories to global issues in order to resist corporate control through diverse collective actions. So finally, and most importantly, the need to decolonize agricultural economies and the ways in which indigenous communities and cultures in the Global South are also already engaged in growing resistance must factor into this future work.”

Emily Eaton is an associate professor of geography at the University of Regina specializing in political economy and natural resource economies. She is also active in a variety of social justice struggles. Eaton’s first book was Growing Resistance: Canadian Farmers and the Politics of Genetically Modified Wheat. 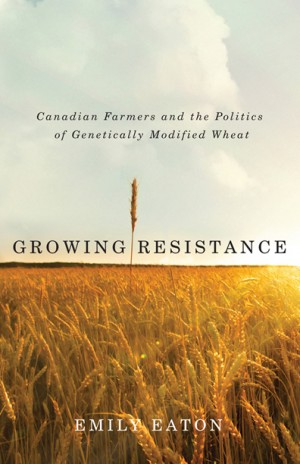