Revisiting the Mennonite Migrants of the 1870s

In the 1870s, approximately 18,000 Mennonites migrated from the southern steppes of Imperial Russia (present-day Ukraine) to the North American grasslands. They brought with them an array of cultural and institutional features that indicated they were a “transplanted” people. What is less frequently noted, however, is that they created in their everyday lives a world that ensured their cultural longevity and social cohesiveness in a new land.

Their adaptation to the New World required new concepts of social boundary and community, new strategies of land ownership and legacy, new associations, and new ways of interacting with markets. In Hidden Worlds, historian Royden Loewen illuminates some of these adaptations, which have been largely overshadowed by an emphasis on institutional history, or whose sources have only recently been revealed. Through an analysis of diaries, wills, newspaper articles, census and tax records, and other literature, an examination of inheritance practices, household dynamics, and gender relations, and a comparison of several Mennonite communities in the United States and Canada, Loewen uncovers the multi-dimensional and highly resourceful character of the 1870s migrants. 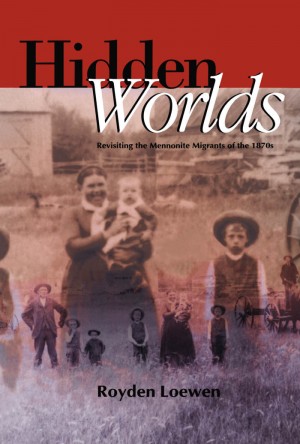