I Will Live for Both of Us

A History of Colonialism, Uranium Mining, and Inuit Resistance

Born at a traditional Inuit camp in what is now Nunavut, Joan Scottie has spent decades protecting the Inuit hunting way of life, most famously with her long battle against the uranium mining industry. Twice, Scottie and her community of Baker Lake successfully stopped a proposed uranium mine. Working with geographer Warren Bernauer and social scientist Jack Hicks, Scottie here tells the history of her community’s decades-long fight against uranium mining.

Scottie’s I Will Live for Both of Us is a reflection on recent political and environmental history and a call for a future in which Inuit traditional laws and values are respected and upheld. Drawing on Scottie’s rich and storied life, together with document research by Bernauer and Hicks, their book brings the perspective of a hunter, Elder, grandmother, and community organizer to bear on important political developments and conflicts in the Canadian Arctic since the Second World War.

In addition to telling the story of her community’s struggle against the uranium industry, I Will Live for Both of Us discusses gender relations in traditional Inuit camps, the emotional dimensions of colonial oppression, Inuit experiences with residential schools, the politics of gold mining, and Inuit traditional laws regarding the land and animals. A collaboration between three committed activists, I Will Live for Both of Us provides key insights into Inuit history, Indigenous politics, resource management, and the nuclear industry.

“I Will Live for Both of Us is the first-hand account of an incredible woman’s resistance to uranium mining in her region specifically, but it is also a detailed description of the history of colonialism in the Kivalliq region, and the past and present structures that perpetuate colonialism. It shines a light on the critical activism that has been happening in this region over the course of decades.”

“I Will Live for Both of Us offers a unique and important contribution to our understanding of the history and contemporary debates around mining in the Canadian North. It foregrounds the voice and activism of an Inuk woman, Joan Scottie, and documents her long struggle against the incursions of uranium mining in the Kivalliq Region of Nunavut. Written accessibly it will appeal to readers interested in the North, Indigenous issues, and industrial development.”

– Arn Keeling, Co-author of Mining Country: A History of Canada’s Mines and Miners

Joan Scottie is an Inuk Elder living in the community of Qamani’tuaq Baker Lake, Nunavut. Joan was born and raised on the land at a traditional Inuit camp. Since the 1980s, she has been a vital voice for Inuit opposition to uranium mining. Joan is a grandmother and avid hunter.

Warren Bernauer is a postdoctoral fellow at the Natural Resources Institute and the Department of Environment and Geography at the University of Manitoba.

Jack Hicks worked for Inuit organizations for more than thirty years. He is Adjunct Professor in the Department of Community Health and Epidemiology, College of Medicine, University of Saskatchewan. 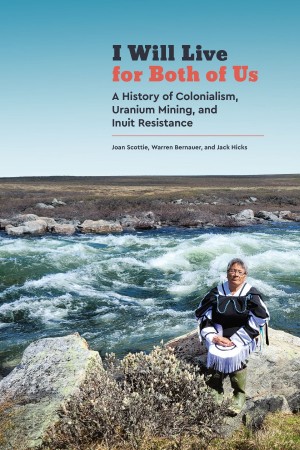