In Good Relation captures this transition and makes sense of Indigenous feminist voices that are not necessarily represented in existing scholarship. There is a need to further Indigenize our understandings of feminism and to take the scholarship beyond a focus on motherhood, life history, or legal status (in Canada) to consider the connections between Indigenous feminisms, Indigenous philosophies, the environment, kinship, violence, and Indigenous Queer Studies. Organized around the notion of “generations,” this collection brings into conversation new voices of Indigenous feminist theory, knowledge, and experience. Taking a broad and critical interpretation of Indigenous feminism, it depicts how an emerging generation of artists, activists, and scholars are envisioning and invigorating the strength and power of Indigenous women.

“In Good Relation accomplishes precisely what the early Indigenous feminists worked so hard to pave the way for; that is, it unapologetically engages a diverse and multi-dimensional range of conversations around the violences and erasures of settler colonialism and heteronormative patriarchy, continually generating new knowledge, connections, relationships, and ideas about how to work towards a better life.”

“In Good Relation breaks ground, extends knowledge terrains, and respectfully invites readers to open their mind, to be challenged, changed, and even charmed.”

“This well-researched and highly readable volume is a collection of broad and historically underrepresented voices of artists, activists and scholars in an attempt to Indigenize feminism in necessary and critical ways.”

“In Good Relation: History, Gender, and Kinship in Indigenous Feminisms is held together by the felt relevance of its critical affinities and intersecting concerns. This ambitious anthology, co-edited by Sarah A. Nickel (Tk’emlupsemc/French Canadian/Ukrainian) and Amanda Fehr, sets out to diversify understandings of Indigenous feminisms, recentre 2SQ (Two-Spirit and queer) perspectives, and sustain cross-generational and Indigenous transnational conversations.”

“This writing is so necessary in encouraging us to take up a culture-based practice that does not contribute to further oppression. […] In Good Relation is a dynamic read for anyone wishing to learn more about Indigenous feminisms.”

“One of the strengths of this volume is its inclusion of diverse time periods, geographic locations, topics, perspectives, audiences, and styles. The inclusion of nonbinary and Two-Spirit voices—perspectives that are often missing in feminist anthologies—adds to this volume’s uniqueness and success.”

“In Good Relation defies simple dichotomies and compartmentalisations, with contributors’ different backgrounds and positions highlighting diverse ways to engage with Indigenous feminisms today, inside and outside of academia. This book poses important questions and offers insightful reflections on a topic that is gaining powerful momentum in Canada. Its nuanced treatment of the complexities involved in thinking about Indigenous feminisms renders it valuable to a variety of readers interested in feminist, queer, and decolonial studies.”

Sarah Nickel is a Tk’emlupsemc Assistant Professor of Indigenous Studies at the University of Saskatchewan. Her first book, Assembling Unity: Pan-Indigenous Politics, Gender, and the Union of BC Indian Chiefs, was published in 2019. Her next project explores Indigenous women’s political work in the twentieth-century west.

Amanda Fehr is a white settler from Saskatoon. She completed her PhD in History at the University of Saskatchewan in 2018. Her doctoral research included community engaged oral history work in the predominantly Métis community of Île-à-la-Crosse and with the English River First Nation. She works as an educator, researcher, and public engagement consultant. 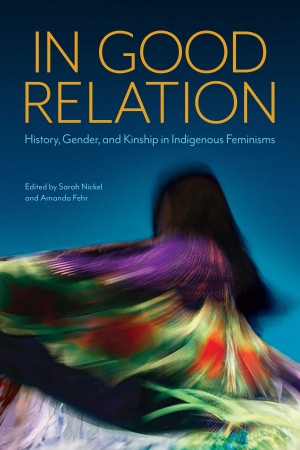