In Her Own Voice

Winnipeg writer Katherine Martens interviewed 26 women from the Mennonite community in southern Manitoba, ranging in age from 22 to 88 years old. They had many different backgrounds, but they all had one important characteristic: all were mothers.

In the course of these interviews, Martens was searching for answers to questions that affected her both as a Mennonite and as a woman. How did they feel when they learned of the pregnancy? How did they choose home or hospital birth? How did the traditions of the Mennonite culture affect them as wives and mothers? As they talked, many spoke about the joys and trials of giving birth, and they also told Martens stories about other parts of their lives. Some had escaped the Russian Revolution to emigrate to Canada; others spent their entire lives in rural Manitoba, part of the close-knit Mennonite community, running farms and bearing as many as 15 children. Younger women who had formally left the Mennonite church were still conscious of the impact of the beliefs and customs on their lives.

Many women were surprised to be approached for an interview, insisting that they had “no stories to tell.” One was visited in a dream by her dead husband, who told her to “leave that alone.” Yet, in the privacy of their kitchens and parlours, over sociable cups of tea, many did share with Martens their private fears and joys about what was often seen as a rite of passage into responsible adulthood, and they recalled that childbirth could be a difficult and, at times, traumatic event, but it could also be a radiant and spiritual experience.

Katherine Martens grew up in rural Manitoba, the ninth in a family of fifteen children. In Her Own Voice is her second book. 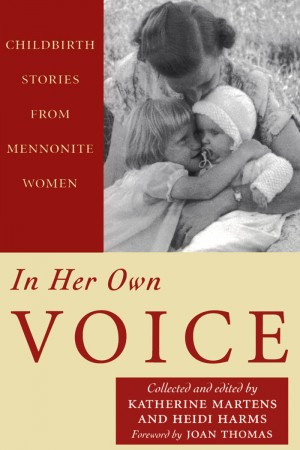