Indigenous Celebrity speaks to the possibilities, challenges, and consequences of popular forms of recognition, critically recasting the lens through which we understand Indigenous people’s entanglements with celebrity. It presents a wide range of essays that explore the theoretical, material, social, cultural, and political impacts of celebrity on and for Indigenous people. It questions and critiques the whitestream concept of celebrity and the very juxtaposition of “Indigenous” and “celebrity” and casts a critical lens on celebrity culture’s impact on Indigenous people.

Indigenous people who willingly engage with celebrity culture, or are drawn up into it, enter into a complex terrain of social relations informed by layered dimensions of colonialism, racism, sexism, homophobia/transphobia, and classism. Yet this reductive framing of celebrity does not account for the ways that Indigenous people’s own worldviews inform Indigenous engagement with celebrity culture––or rather, popular social and cultural forms of recognition.

Indigenous Celebrity reorients conversations on Indigenous celebrity towards understanding how Indigenous people draw from nation-specific processes of respect and recognition while at the same time navigating external assumptions and expectations. This collection examines the relationship of Indigenous people to the concept of celebrity in past, present, and ongoing contexts, identifying commonalities, tensions, and possibilities.

“Indigenous Celebrity is well written and engaging, and also provocative. It offers a crucial challenge to scholars whose assumptions about celebrity have been formed and structured by settler-colonial cultures: to rethink how they think about celebrity.”

Jennifer Adese is Otipemisiwak/Métis and is the Canada Research Chair in Métis Women, Politics, and Community and an Associate Professor in the Department of Sociology at University of Toronto Mississauga (UTM). She is the co-editor, with Chris Andersen, of A People and a Nation: New Directions in Contemporary Métis Studies. 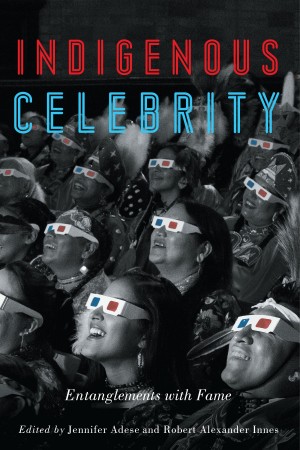