The Letters of Margaret Laurence and Gabrielle Roy

The books of Margaret Laurence and Gabrielle Roy are among the most beloved in Canadian literature. In 1976, when both were at the height of their careers, they began a seven-year written correspondence. Laurence had just published her widely acclaimed The Diviners, for which she won her second Governor-General’s Award, and Roy had returned to the centre of the literary stage with a series of books that many critics now consider her richest and most mature works.

Although both women had been born and raised in Manitoba —Laurence in Neepawa and Roy in St. Boniface — they met only once, in 1978 at a conference in Calgary. As these letters reveal, their prairie background created a common understanding of place and culture that bridged the differences of age and language. Here Laurence and Roy discuss everything from their own and each other’s writing, to Canadian politics, housekeeping, publishing, and their love of nature. With a thoughtful introduction by Paul G. Socken, these lovely and intimate letters record the moving, affectionate friendship between two remarkable women.

“… a gem, a small book beautifully produced to take its place as a special treasure on the shelves of Roy and Laurence lovers.”

“For admirers of Canadian writers in general and the work of Laurence and Roy in particular, this correspondence is invaluable.”

“By the end of the correspondence, we have learned a lot about the lives, the characters, and the writing. We are grateful to Socken for the treasure that chronicles the correspondence of two important Canadian writers.”

“Paul Socken’s edition of the letter of these ‘intimate strangers’ affords a rare glimpse into the writers’ private worlds. His brief introduction gives an excellent overview of their lives, and documents the context for the letters, emphasizing the writers’ ‘shared values and shared heritage’.”

Paul Socken teaches French at the University of Waterloo. He is the editor of Gabrielle Roy Aujourd’hui/Today and the author of The French They Never Taught You. 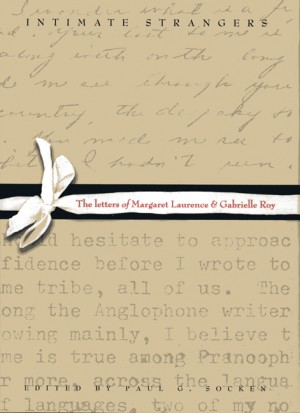