In medieval Iceland, the office of the lawspeaker was an onerous one. For almost two centuries the incumbents of this office were obliged to memorize the laws and proclaim them publicly at the annual meetings of the national assembly. The demands of this task make it easy to understand why, in the early twelfth century, the codification of laws precedes most other scribal pursuits in the history of vernacular writing in Iceland. The two most important manuscripts of medieval Icelandic laws are dated to the latter half of the thirteenth century. The laws contained in these manuscripts are collectively referred to as Gragas (Grey Goose), a title of uncertain origins.

This translation of the second volume of Gragas, produced by three internationally recognized medievalists, was first published in 2000. It serves as an important resource, not only for students of ancient Icelandic and European legal practices and concepts, but for everyone interested in the social history of the Middle Ages.

“An amazing social document … that is the blueprint for an unprecedented social experiment. … An example of scholarship of the highest order.”

Peter Foote was of Old Icelandic at University College London.

Richard Perkins was a lecturer in Norse Studies at University College London. 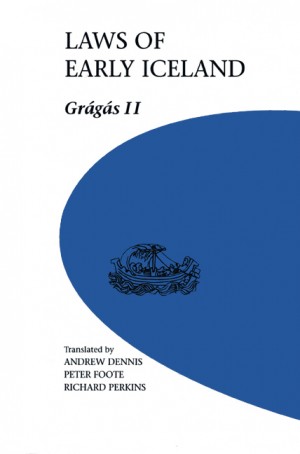