Nestor Makhno has been called a revolutionary anarchist, a peasant rebel, the Ukrainian Robin Hood, a mass-murderer, a pogromist, and a devil. These epithets had their origins in the Russian Civil War (1917–21), where the military forces of the peasant-anarchist Nestor Makhno and Mennonite colonists in southern Ukraine came into conflict. In autumn 1919, Makhnovist troops and local peasant sympathizers murdered more than 800 Mennonites in a series of large-scale massacres.

The history of that conflict has been fraught with folklore, ideological battles and radically divergent cultural memories, in which fact and fiction often seamlessly blend, conjuring a multitude of Makhnos, each one shouting its message over the other.

Drawing on theories of collective memory and narrative analysis, Makhno and Memory brings a vast array of Makhnovist and Mennonite sources into dialogue, including memoirs, histories, diaries, newspapers, and archival material. A diversity of perspectives are brought into relief through the personal reminiscences of Makhno and his anarchist sympathizers alongside Mennonite pacifists and advocates for armed self-defense.

Through a meticulous analysis of the Makhnovist-Mennonite conflict and a micro-study of the Eichenfeld massacre of November 1919, Sean Patterson attempts to make sense of the competing cultural memories and presents new ways of thinking about Makhno and his movement. Makhno and Memory offers a convincing reframing of the Mennonite-Makhno relationship that will force a scholarly reassessment of this period.

“In this immaculately researched book, Sean Patterson has forged a new way of thinking about the anarchist Nestor Makhno and the Mennonites in the Ukraine just after the Russian revolution. Faith and class collide in this telling. There is no ideology here, only a desire to make sense of how history is shaped, and who gets to tell the story, and how vengeance and justice become two sides of the same coin.”

– David Bergen, author of Stranger and The Time in Between

“Patterson’s analysis strips away the veneer of myth and legend that has accumulated around the name of Nestor Makhno over the past century. The result is that Makhno emerges from this work not as a one-dimensional populist hero or heartless murderer, but as a multi-dimensional historical personality whose movement played a pivotal role in determining the outcome of the revolution and civil war in Ukraine. Patterson’s work will serve as an important corrective to prevailing interpretations of the Ukrainian anarchist experience in the nascent development of the Soviet regime.”

“A highly sensitive reading of the memoir literature that offers a very convincing account of the relationship between the Makhnovist movement and the Mennonite community. A fascinating monograph.”

“A tremendous case study in how groups tend to rationalize their place in violent times, legitimating their identity — in this case Makhnovists as freedom fighters and Mennonites as faithful in persecution. Individuals and events then become concentrated as symbols that can no longer communicate the breadth and complexity of the reality they represent. Patterson does not tell us how to discern and evaluate these complexities — only that they must be considered if we hope to address past, and ongoing, realities of violence.”

“Makhno and Memory is a well researched, well written, balanced work that takes the reader on a journey into the depths of shadowy history, human sorrow, tragedy and bravery. The author’s ability to open his heart to listen to all the conflicting stories compels the reader to do the same.”

“Sean Patterson’s monograph is well written and thoroughly researched. It can serve as a model to other students of Mennonite history as to how to explore our history—our collective memories— and determine how those memories fit with competing memories, both internal as well as external. By acknowledging and understanding the broader and at times competing narratives, Mennonites can come to a fuller and more accurate understanding of their story.”

“Much of what has been written about Makhno, by both Mennonites and anarchists, suffers from its reliance on ahistorical mythmaking. Patterson effectively identifies the sources and preconceptions of these sources and moves our understanding into new territory.”

“Sean Patterson has written a clear and engaging study that is both nuanced and insightful. It raises important questions and deserves a broad readership. One eagerly awaits his next publication.”

Sean Patterson is a doctoral student at the University of Alberta, exploring historical memory in Ukraine’s Zaporizhia region over the 20th century. Patterson graduated from the University of Manitoba and University of Winnipeg’s joint masters program, where he was awarded the W.L. Morton Gold Medal for outstanding research. He currently resides in Edmonton, Alberta. 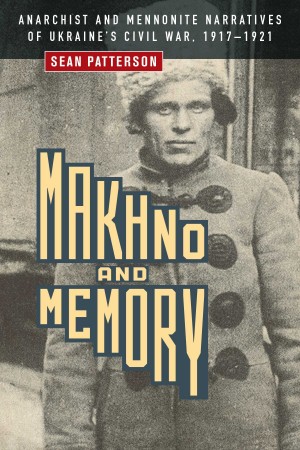