Questions About Mennonites and Art

“Making Believe combines one woman’s deep intellectual and emotional engagements with family memory and community history as she traces the origins of the artistic renaissance among Mennonites in southern Manitoba. Art and play are essential to all of life, Redekop insists, as she makes the case for dialogic risk, refusing to shun the world or the worldly, whatever form that gesture may take. Her passionate voice speaks from the borders straight to our current cultural binds.”

“Making Believe sharpens its rhetorical edge on the whetstone of genre-play, granting special attention to the dual questions of art’s place in a culture, and of Mennonite culture’s place in art. Reading slippage, leeway, and productive margins of error, Magdalene Redekop brings her clown-capacious eye to the many ways text and performance ‘make belief’ for us. Her critical-creative voice is fierce and generous; this is literary history written by a witness, something especially needed in the larger field of Canadian literature where memories can be both short and revisionist. Read it and be reminded of how you believe.”

“One review cannot do justice to the comprehensive nature of the book. Redekop offers an encyclopedic compendium of artistic, critical, and cultural observations.”

“Encourages readers to engage art by Mennonites — using a broad understanding of that designation — and dialogue with it, especially when it disturbs us.” 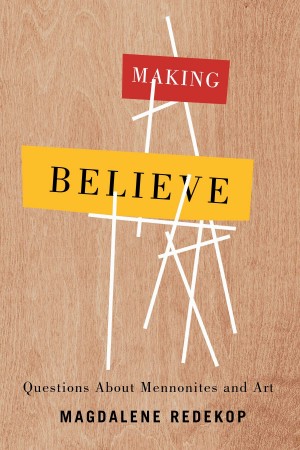