Manitoba has always been a province in the middle, geographically, economically, and culturally. Lacking Quebec’s cultural distinctiveness, Ontario’s traditional economic dominance, or Alberta’s combustible mix of prairie populism and oil wealth, Manitoba appears to blend into the background of the Canadian family portrait. But Manitoba has a distinct political culture, one that has been overlooked in contemporary political studies.

Manitoba Politics and Government brings together the work of political scientists, historians, sociologists, economists, public servants, and journalists to present a comprehensive analysis of the province’s political life and its careful “mutual fund model” approach to economic and social policy that mirrors the steady and cautious nature of its citizens. Moving beyond the Legislature, the authors address contemporary social issues like poverty, environmental stewardship, gender equality, health care, and the province’s growing Aboriginal population to reveal the evolution of public policy in the province. They also examine the province’s role at the intergovernmental and international level.

Manitoba Politics and Government is a rich and fascinating account of a province that strives for the centre, for the delicate middle ground where individualism and collectivism overlap, and where a multitude of different cultures and traditions create a highly balanced society.

“By far, the best contemporary book on a province’s politics and government.”

“There is a wealth of information in this volume that will make it essential reading for any serious student of Manitoba politics for many years to come. … It will also have considerable utility for those whose teaching and research interests include both Canadian and northern Great Plains history, politics and society.”

“The book includes contributions that will be of interest to historians and sociologists, as well as readers interested in Aboriginal issues, federalism and regional studies, and, of course, Canadian studies. Finally, the book is accessible to the wider reading public, and Manitobans in particular will want to pick up a copy in order to better understand their own province.”

Paul Thomas is the Duff Roblin Professor of Government in the Department of Political Studies at the University of Manitoba.

Curtis Brown is a Duff Roblin Scholar in the Department of Political Studies at the University of Manitoba. 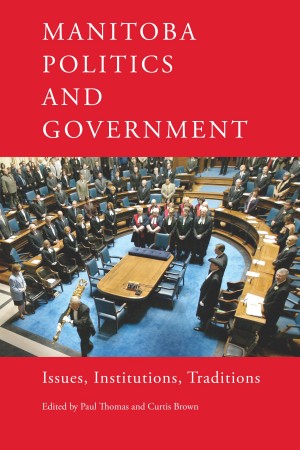