Between October 2010 and May 2013, Sam McKegney conducted interviews with leading Indigenous artists, critics, activists, and elders on the subject of Indigenous manhood. In offices, kitchens, and coffee shops, and once in a car driving down the 401, McKegney and his participants tackled crucial questions about masculine self-worth and how to foster balanced and empowered gender relations.

Masculindians captures twenty of these conversations in a volume that is intensely personal, yet speaks across generations, geography, and gender boundaries. As varied as their speakers, the discussions range from culture, history, and world view to gender theory, artistic representations, and activist interventions. They speak of possibility and strength, of beauty and vulnerability. They speak of sensuality, eroticism, and warriorhood, and of the corrosive influence of shame, racism, and violence. Firmly grounding Indigenous continuance in sacred landscapes, interpersonal reciprocity, and relations with other-than-human kin, these conversations honour and embolden the generative potential of healthy Indigenous masculinities.

“A rich, complex series of discussions of one of the most pressing subjects of Indigenous decolonization today… McKegney’s twenty-two in-depth conversations with Indigenous artists, activists, and intellectuals both inside the academy and in community are each tremendously useful in helping readers understand what is at stake in the ways we define Indigenous masculinities, celebrate them, critique them, construct them within our families and in our communities, and live them as men.”

– Christopher B. Teuton, University of North Carolina at Chapel Hill

“McKegney interviews male and female educators, artists (including writers such Joseph Boyden, Lee Maracle and Tomson Highway), scholars, social workers, elders, and others who attest to the myriad conceptions of indigenous manhood that range from the affirmingly spiritual to the purposefully vulnerable. […] Many a fascinating discussion about modern indigenous identities.”

“Though the book’s central goal is the discussion of masculinity, McKegney’s work thankfully avoids the trap of a reductive ‘What about the men?’ viewpoint, allowing the participants’ conversations to delve into wider issues of gender roles and binarism in order to examine how healthier models of masculinity can benefit not just indigenous men but their communities as a whole. A valuable resource on a little-discussed subject, and a worthwhile read for anyone interested in a critical look at the overall issue of gender in indigenous societies.”

“As the first of its kind, this collection of conversations about Indigenous masculinity offers an invaluable contribution to the fields of Indigenous Studies, Gender and Women’s Studies, Indigenous Literature and Cultural Studies, Settler Colonial Studies, and beyond.”

“Masculindians is not a book about tragic masculinities. Rather, the contributors share compelling stories of beautiful and healthy masculinities disrupted by colonization. Their stories speak of resilience and resistance and resurgence.”

“A valuable contribution to Indigenous masculinity studies. Very few texts focus on Indigenous manhood and masculinities, and this book provides an opportunity to expand this area of study and to engage in conversations on Indigenous community and Native nation building.”

“Masculindians is a collection of twenty-three conversations with Indigenous women and men from throughout North America and Oceania, Two-Spirit and straight people, as well as artists and scholars who talked about, among other things, Indigenous masculinity. The chapters are more than conversations. They are artifacts from which we can later draw meaning in order to reimagine Indigenous masculinity’s pluralisms, possibilities, and potentials.”

“Robert Innes’ and Sam McKegney’s books are path clearing, situating Indigenous ways of knowing at the centre of their methodologies. The personal qualities of both books—the centrality of stories—push the reader, particularly the Indigenous reader, to really think about their place in the world and the responsibilities we carry to others.”

“Brings together studies in masculinities and indigeneity, and most specifically the problematic constructed trope of the hypermasculine Indian, through conversations with leading scholars and artists. This structure emphasizes oral discourses, storytelling, and relational knowledge.”

“Masculindians makes a very significant contribution to the field of Women’s and Gender Studies. The collection elaborates on concepts and approaches that are in step with the work of Indigenous scholars like Kim Anderson, Lee Maracle, and Eva Tuck, among others, which aim to decolonize not only feminist theory, but also its methods. While Indigenous feminists have theorized representations and images of Indigenous women and communities, establishing connections between settler imaginaries and the material precarity and violence of Indigenous women’s lives, Indigenous masculinities are long overdue for critical analysis in ways that take seriously intersectional gender justice and colonizing uses and appropriations of human sexuality. The collection helps to clarify links between the gender imaginaries generated in the context of ongoing colonialism and the violence that plagues Indigenous men’s lives. In this sense, Masculindians aligns with the urgent need to theorize masculinities as a site of potential healing and transformation, drawing on theoretical approaches emerging from the field of cultural studies, as it engages in intersectional gender-based inquiry.

Contemporary conditions demonstrate how politically pressing it is to understand the ways in which heteropatriarchy operates through a spectrum of violent approaches to the construction of masculinities, by recognizing the connections between masculine subjectivities and larger issues of structural violence and oppression. Moreover, this book aligns itself with queer theory as it makes a concerted effort to understand masculinities as simulations, rather than expressions of either a presumed biological make up or fixed cultural identities. Masculindians is beautifully constructed through a series of conversations among a diverse group of scholars, artists, and elders and is organized into three inter-sections: Wisdom, Knowledge, and Imagination. The conversations themselves are very well articulated. They avoid simple explanations and instead look for complexity and nuance, while at the same time presenting ideas in prose that is very accessible reading for non-experts. Beyond making the necessary connections between heteropatriarchy and colonialism, Masculindians makes room for reimagining cultural identities and traditions, for creativity and more utopian aspirations.”

“Distills the acumen of the scholars, journalists, playwrights, authors, poets, mothers, fathers, and sons who sat with him and identified, and commiserated on, the paradigms of maleness and manliness.”

“A strong beginning to the work of critical studies of Indigenous masculinities.”

Sam McKegney is a settler scholar of Indigenous literatures. He grew up in Anishinaabe territory on the Saugeen Peninsula along the shores of Lake Huron and currently resides with his partner and their two daughters in traditional lands of the Haudenosaunee and Anishinaabe peoples where he is an Associate Professor and Graduate Chair in the English Department at Queen’s University. He has published a collection of interviews entitled Masculindians: Conversations about Indigenous Manhood, a monograph entitled Magic Weapons: Aboriginal Writers Remaking Community after Residential School, and articles on such topics as environmental kinship, masculinity theory, prison writing, Indigenous governance, and Canadian hockey mythologies. 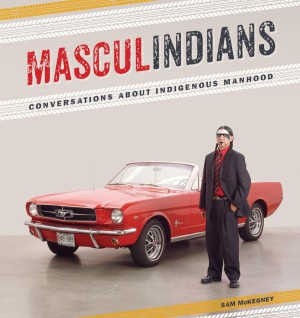