mitoni niya nêhiyaw / Cree is who I truly am

nêhiyaw-iskwêw mitoni niya / me, I am truly a Cree woman

Strong women dominate these reminiscences: the grandmother taught the girl whose mother refused to let her go to school, and the life-changing events they witnessed range from the ravages of the influenza epidemic of 1918–20, to murder committed in a jealous rage, to the abduction of a young woman by underground spirits who grant her healing powers upon her release.

A highly personal document, these memoirs are altogether exceptional in recounting the thoughts and feelings of a Cree woman as she copes with the challenges of reserve life but also, in a key chapter, with her loneliness while tending a relative’s children in a place far away from home – and, apparently just as debilitating, away from the company of other women. Her experiences and reactions throw fresh light on the lives lived by Plains Cree women on the Canadian prairies over much of the twentieth century.

The late Sarah Whitecalf (1919-1991) spoke Cree exclusively, spending most of her life at Nakiwacîhk / Sweetgrass Reserve on the North Saskatchewan River. This is where Leonard Bloomfield was told his Sacred Stories of the Sweet Grass Cree in 1925 and where a decade later David Mandelbaum apprenticed himself to Kâ-miyokîsihkwêw / Fineday, the step-grandfather in whose family Sarah Whitecalf grew up.

In presenting a Cree woman’s view of her world, the texts in this volume directly reflect the spoken word: Sarah Whitecalf’s memoirs are here printed in Cree exactly as she recorded them, with a close English translation on the facing page.They constitute an autobiography of great personal authority and rare authenticity.

“This book should be of immediate interest to scholars of Cree language and linguistics, to historians, and to Indigenous scholars. Other non-specialists, especially settlers seeking ways to respond to the TRC’s calls to action, can also read these stories to learn the truths of 20th-century Cree life after colonization but also as a window into the traditional Cree language, culture, and ways.”

Sarah Whitecalf (1919–1991) spoke Cree exclusively, spending most of her life at Nakiwacîhk/Sweetgrass Reserve on the North Saskatchwan River. Her lectures are collected in The Cree Language Is Our Identity.

Ted Whitecalf is Sarah Whitecalf’s son and a professional photographer. His Sweet Grass Records/Productions in Saskatoon has been publishing recordings of Indigenous music and photographic books for over twenty-five years. 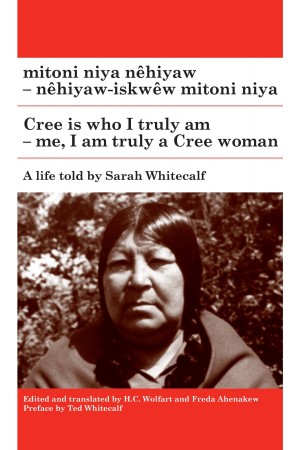