A Memoir of the Early Years of the National Film Board

Graham McInnes was one of many talented young people recruited by the charismatic John Grierson to build the National Film Board of Canada during the heady days of WWII. McInnes’s memoir of these “days of high excitement” is an insider’s look at the NFB from 1939 to 1945, a vivid “origin” story of Canada’s emerging world-class film studio that provides the NFB with the kind of full-bodied vitality usually associated with the great Hollywood studios in their golden years.

An art critic and CBC radio commentator when he joined the NFB in 1939 as a scriptwriter, McInnes worked on many film classics with filmmakers such as Tom Daly, Norman McLaren, Gudrun Parker, and Budge Crawley. McInnes portrays these legends as well as many other players in that dynamic world, such as Lorne Green, Morley Callaghan, and Mavis Gallant, in this stylish, witty, and affectionate recreation of the early day-to-day frenzy.

One Man’s Documentary is a lively account of one of the most exciting periods in Canadian filmmaking. With style and verve, McInnes paints vivid portraits of Grierson and the others who helped make the NFB an international institution. Film historian Gene Walz’s introduction gives a full picture of the early history of the NFB as well as an account of McInnes’s fascinating life.

“This is perhaps the best first-person read available about the early NFB … it’s like picking up a 1940s issue of The New Yorker.”

“McInnes’s writing is highly engaging, with a wryness and eye for the incongruous similar to those of Charles Ritchie. His work consists in large measure of observant portraits of many of his co-workers, larded with anecdotes, some of which bring valuable insights into the film-making processes of the board. The prose is often unforgettable. …Gene Walz is to be congratulated for bringing this little-known manuscript to the light of day.”

“Perhaps the most intimate account we have of Grierson … a precious fragment of history, rescued at last.”

“Walz has rescued this book from archival obscurity…. a pleasure to read and provides insight into the complexities of history.”

“Because of his relative obscurity, as well as the thirty-five-year delay of publication, not to mention the sixty years that have elapsed since the recounted events took place, this memoir has the feel of a time capsule. Innocent of the debates that have ensued in subsequent years about the place of the Film Board in Canadian film history, McInnes writes with an enthusiasm infused by his memories of youth, new technology, and the sense of purpose provided by the war that is often quite engaging. At times his frank assessments of many aspects of the NFB are downright surprising. Take, for example, this admission of ambivalence about Grierson’s watchword, non-theatrical documentary film: ‘Though Grierson was himself a born teacher and evangelist, and though it was an article of faith with him that film, documentary film, was the great teaching and information medium of the future, he could never get us really excited over non-t[heatrical]’ (48, italics in original). Admissions such as these, along with often racy stories about NFB employees and their circle, give a vivid and not entirely positive picture of working at the Board, which seems all the more compelling as a result.”

Graham McInnes was arts columnist for Saturday Night magazine and a commentator on CBC radio before joining the NFB in 1939. After leaving the NFB in 1945, he joined the foreign service and eventually became Canada’s first ambassador to UNESCO. He was the author of two novels and three volumes of memoirs. Graham McInnes died in 1970.

Gene Walz teaches film and film history at the University of Manitoba. He is the author of Cartoon Charlie: The Life and Art of Animation Pioneer Charles Thorson and editor of Canada’s Best Features. 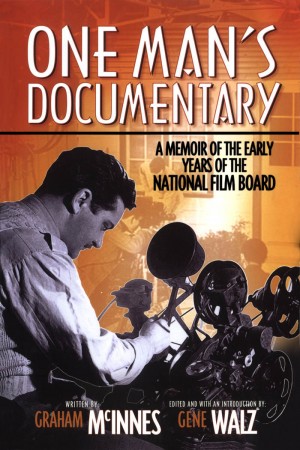