Alexander Begg and Joseph Hargrave on the Red River Resistance

Reporting the Resistance brings together two first-person accounts to give a view “from the ground” of the developments that shocked Canada and created the province of Manitoba. In 1869 and 1870, Begg and Hargrave were regular correspondents for (respectively) the Toronto Globe and the Montreal Herald.

While neither man was a committed supporter of the Metis or Louis Riel, each gives a more complex, and more sympathetic, view of the resistance than is commonly expected from the Anglophone community of Red River. They describe, often from very different perspectives, the events of the resistance, as well as give insider accounts of the social and political background. Largely unreprinted until now, this correspondence remains a relatively untapped resource for contemporary views of the resistance. These are the Red River’s own accounts, and are often quite different from the perspective of eastern observers.

“The importance of this work to historians of Red River and early Manitoba cannot be overstated because of the value of these sources.” 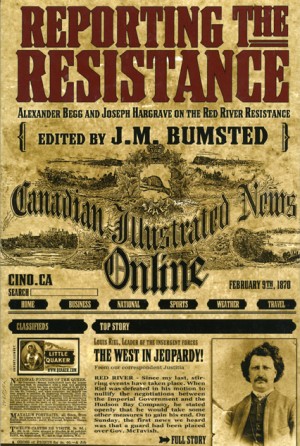