First Nations peoples believe the eagle flies with a female wing and a male wing, showing the importance of balance between the feminine and the masculine in all aspects of individual and community experiences. Centuries of colonization, however, have devalued the traditional roles of First Nations women, causing a great gender imbalance that limits the abilities of men, women, and their communities in achieving self-actualization.

Restoring the Balance brings to light the work First Nations women have performed, and continue to perform, in cultural continuity and community development. It illustrates the challenges and successes they have had in the areas of law, politics, education, community healing, language, and art, while suggesting significant options for sustained improvement of individual, family, and community well-being.

Written by fifteen Aboriginal scholars, activists, and community leaders, Restoring the Balance combines life histories and biographical accounts with historical and critical analyses grounded in traditional thought and approaches. It is a powerful and important book.

“The collection’s great strength is its incredible tightness – authors often explore the same issues, histories, individuals, and legislations from a variety of angles, weaving together many different strands into a clear, compelling whole. The collection achieves the remarkable for an academic text – focusing on analysis and action, exploring problems and presenting solutions. All of the chapters are well written and engaging, and a handful – on trauma and resilience, Aboriginal women’s writings, cultural competence, and museum artifacts – are especially excellent.”

“This timely text, directed to policy-makers, educators and community members, presents a wide-ranging collection of papers all of which address the task of restoring gender balance in terms of both the representation of and the reality of First Nations women’s participation in various social contexts. Importantly it also documents some of the outstanding work women have been doing over the last several decades in this regard.”

– Celia Haig-Brown, York University, the Journal of the Society for Socialist Studies

“By merging indigenous principles of communication with constructive academic norms, Restoring the Balance: First Nations Women, Community, and Culture transcends its inert print to serve as an active space of knowledge sharing and cultural continuity….While maintaining a strong rationale for celebrating the particular roles and meanings associated with women, masculine gender roles are respectfully treated as essential to community balance. In this way, Restoring the Balance defeats what Wesley-Esquimaux discerns as colonialism’s major restriction on the physical and metaphorical social movement of Aboriginal persons. Through their example, the contributing authors of Restoring the Balance demonstrate that intellectual freedom can be judiciously employed to produce valuable work that is simultaneously academic and activist.”

Eric Guimond is an assistant director at the Strategic Research and Analysis Directorate at Indian and Northern Affairs Canada.

Gail Guthrie Valaskakis was a Distinguished Professor Emeritus of Concordia University and was a leading authority on Aboriginal Media and Communication. She passed away in 2007.

Madeleine Dion Stout is a former nurse and founding director of the Centre of Aboriginal Education, Research, and Culture at Carleton University. 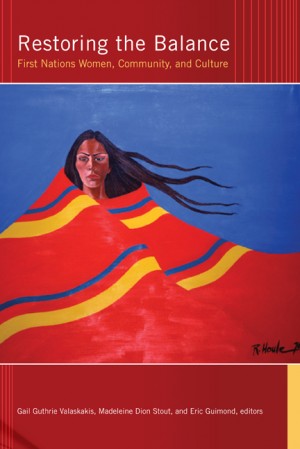