“Rooster Town challenges the lingering mainstream belief that Indigenous people and their culture are incompatible with urban life and opens the door to a broader conversation about the insidious nature of racial stereotypes ubiquitous among the broader Canadian polity.”

“In addition to addressing the gap in scholarship regarding Métis urban experiences, and impressive attention to detail, the real strength of Rooster Town lies in its successful dismantling of colonial narratives that depict Indigenous people as out of place in modern urban society.”

“Takes important steps toward building a greater understanding of #Métis and urban history in Canada.”

“We have many accounts of suburban development, in Winnipeg and elsewhere, but none like this. Rooster Town tells an unusual, revelatory story, adding a new dimension to our understanding of the Canadian urban experience.”

“The stories of the Rooster Town families, their genealogies, and detailed maps together provides an important and interesting study for those seeking to better understand Winnipeg’s history. It also provides insights into the ongoing impact of colonialism in terms of the settling of the Prairies, the priority placed on suburban land development by local governments and the displacement of the urban Métis population.”

“Winnipeg is haunted, appropriately, by Rooster Town. I am so glad we will soon have Evelyn Peters’ book to learn from and work with.”

“Very little is written about Indigenous urban histories. They are typically hidden, or erased, from the histories of Prairie cities, and Canadian cities generally. Rooster Town is an authoritative correction to that colonial erasure in the written record.”

Matthew Stock lives in Ottawa, Ontario, where he works as a civil servant. His research interests include social policy and Canadian history.

Adrian Werner is a GIS analyst whose work has included research in urban form and urban history.

Other contributors: with Lawrie Barkwell. 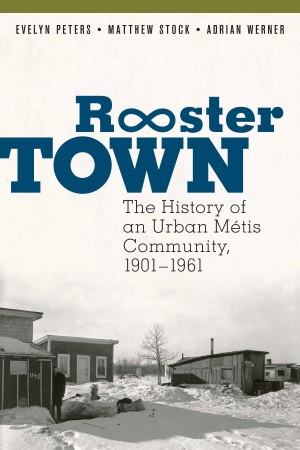