Portraits of the Prairie Town, 1946

In the 1940s, the Manitoba Royal Commission on Adult Education investigated directions for the modernization of the province in the post-war era of change. It was charged particularly with looking at rural Manitoba’s cultural, educational, and leadership opportunities in the wake of new technologies, dwindling populations, and altered political and social affiliations. The commission engaged Jim Giffen, then a young sociologist from the University of Toronto, to undertake a detailed field study of three rural Manitoba towns in this context.

Giffen’s extensive study examined the towns of Carman, Elgin, and Rossburn, all significantly different in terms of their ethnic makeup and level of political and organizational sophistication. He remained in the province for a year and a half, at the end of which his report, an analysis of “education for leadership,” was considered “too revealing” for public release. It remained in the Ontario Legislative Library until it was retrieved, 50 years later, by well-known historian Gerald Friesen, who has written an extensive postscript to the report.

As a snapshot of rural agricultural life in prairie Canada at a time of great change, the study is invaluable. Despite the differences in the three towns, they retain some common characteristics that define a particular socio-cultural view of the larger world. Giffen looks at characteristics such as leadership in the community, ethnic differences, hierarchy of roles, participation in organizations, and aims and activities of young people. Friesen’s postscript provides a wider context to this study, and an assessment of what these differences and commonalities meant to the province.

“Readers will choose their own response to Giffen’s work. For some it will mark and ethnography of mid-twentieth-century rurality, rich enough perhaps to help reinvigorate Canada’s languishing rural historiography. Others will see a philosophically charged, timely treatise on the nature of cultural citizenship. Most will see it as much more than its original intent, that is, as a background study for the architects of an adult education program. All, certainly, will see it as a text worthy of rescue from the obscurity of a provincial vault.”

“… a remarkable picture of rural Manitoba in the first years of peace following the Second World War….Dr. Gerald Friesen and the University of Manitoba Press are to be congratulated for finding, editing and publishing Dr. Giffen’s study and for this valuable addition to our understanding of the history of rural Manitoba.”

P.J. Giffen is a noted sociologist and criminologist. The author of many reports on criminal justice, he taught for three decades at the University of Toronto. 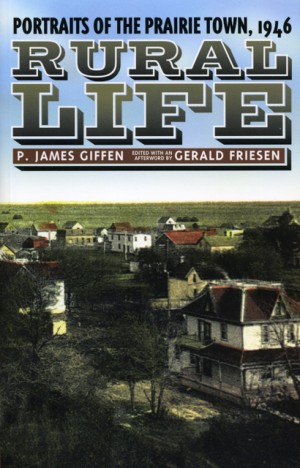