Indigenous Resurgence and Colonial Violence in the Urban Prairie West

While cities like Winnipeg, Minneapolis, Saskatoon, Rapid City, Edmonton, Missoula, Regina, and Tulsa are places where Indigenous marginalization has been most acute, they have also long been sites of Indigenous placemaking and resistance to settler colonialism.

Although such cities have been denigrated as “ordinary” or banal in the broader urban literature, they are exceptional sites to study Indigenous resurgence. T​he urban centres of the continental plains have featured Indigenous housing and food co-operatives, social service agencies, and schools. The American Indian Movement initially developed in Minneapolis in 1968, and Idle No More emerged in Saskatoon in 2013.

The editors and authors of Settler City Limits, both Indigenous and settler, address urban struggles involving Anishinaabek, Cree, Creek, Dakota, Flathead, Lakota, and Métis peoples. Collectively, these studies showcase how Indigenous people in the city resist ongoing processes of colonial dispossession and create spaces for themselves and their families.

Working at intersections of Indigenous studies, settler colonial studies, urban studies, geography, and sociology, this book examines how the historical and political conditions of settler colonialism have shaped urbandevelopment in the Canadian Prairies and American Plains. Settler City Limits frames cities as Indigenous spaces and places, both in terms of the historical geographies of the regions in which they are embedded, and with respect to ongoing struggles for land, life, and self-determination.

“Settler City Limits breaks ground, shattering the powerful authoritative structures of racism that have dichotomized rural and urban space, and Indigenous peoples’ relation to these as a central force sustaining and fortifying settler colonialism.”

“Reminds us that settler colonialism is unsettled business. The essays in this collection provide a varied and vital discussion of the ways that settler violence, dispossession, and “common sense” continue to rage against contemporary practices of Indigenous sovereignty.”

“Settler City Limits is a useful collection that speaks across disciplines that might engage more with Indigenous studies. Its focus on the ‘urban prairie west’ is primarily centered on Canadian cities, particularly Winnipeg, and yet through theorizations of settler space making, it maintains a wide relevance to ongoing international conversations on Indigenous urbanism. Though the majority of this collection could serve well as stand-alone pieces, the strength of this volume is considering its wholeness, which speaks across disciplines, spaces, and histories.”

Heather Dorries is an Assistant Professor in the Department of Geography and Planning and the Centre for Indigenous Studies at the University of Toronto.

Robert Henry is Métis from Prince Albert, Saskatchewan, assistant professor at the University of Saskatchewan in the Department of Indigenous Studies, and co-director of the nātawihowin and mamawiikikayaahk Research Networks.

David Hugill is an Assistant Professor in the Department of Geography and Environmental Studies at Carleton University.

Tyler McCreary is an Assistant Professor in the Department of Geography at Florida State University.

Julie Tomiak is an Assistant Professor in the Department of Sociology at Ryerson University. 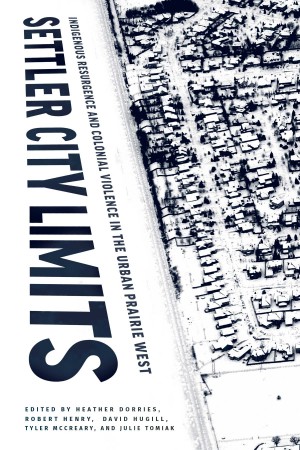