Severing the Ties that Bind

Government Repression of Indigenous Religious Ceremonies on the Prairies

Religious ceremonies were an inseparable part of Aboriginal traditional life, reinforcing social, economic, and political values. However, missionaries and government officials with ethnocentric attitudes of cultural superiority decreed that Native dances and ceremonies were immoral or un-Christian and an impediment to the integration of the Native population into Canadian society. Beginning in 1885, the Department of Indian Affairs implemented a series of amendments to the Canadian Indian Act, designed to eliminate traditional forms of religious expression and customs, such as the Sun Dance, the Midewiwin, the Sweat Lodge, and giveaway ceremonies.

However, the amendments were only partially effective. Aboriginal resistance to the laws took many forms; community leaders challenged the legitimacy of the terms and the manner in which the regulations were implemented, and they altered their ceremonies, the times and locations, the practices, in an attempt both to avoid detection and to placate the agents who enforced the law.

Katherine Pettipas views the amendments as part of official support for the destruction of indigenous cultural systems. She presents a critical analysis of the administrative policies and considers the effects of government suppression of traditional religious activities on the whole spectrum of Aboriginal life, focussing on the experiences of the Plains Cree from the mid-1880s to 1951, when the regulations pertaining to religious practices were removed from the Act. She shows how the destructive effects of the legislation are still felt in Aboriginal communities today, and offers insight into current issues of Aboriginal spirituality, including access to and use of religious objects held in museum repositories, protection of sacred lands and sites, and the right to indigenous religious practices in prison.

“This book is a detailed and precise indictment of the Canadian government and the fundamental racism it practiced. It is a powerful statement about the arbitrary powers of the nation-state as it consolidated its control over Aboriginal peoples of the prairies in the interests of nation-building. It should shock the average Canadian to read how respected Aboriginal leaders were sent to prison for practicing their religion. At the same time, it also points to the determined persistence of Aboriginal peoples in defining for themselves their own selfinterest and in exploring a wide range of strategies to resist government initiatives.”

“For those who wish to understand more fully the creation, implementation, and impact of ‘Indian’ policy in Canada, Severing the Ties That Bind is an excellent source.”

“Katherine Pettipas has written an interesting and important book on the Canadian government’s repression of Indigenous religious ceremonies on the prairies. Her study contributes greatly to an understanding of the severe damage done to Plains Cree society by government officials and missionaries.”

“Provides much evidence about the complexities, contradictions, and contingencies of governing a culturally-diverse, liberal-democratic, and capitalist society, and complicates our understanding of state power and the process of domination.”

“One of the better histories of Western Canadian Indians of the contact period.”

Katherine Pettipas is Curator of Native Ethnology at the Manitoba Museum and has a doctorate in history and anthropology. As a curator, she is dedicated to working with First Nations communities to develop greater access to collections and to implement more culturally appropriate means to care for sacred materials. 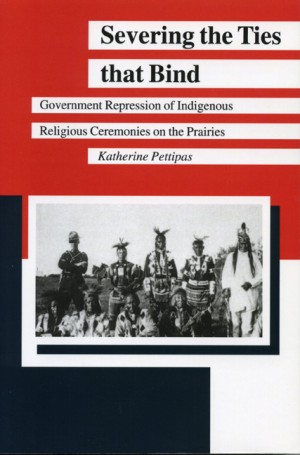